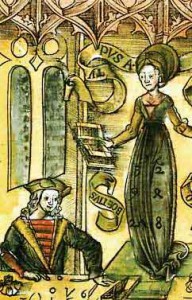 My favorite fifth grader recently read the classic book Where the Red Fern Grows, and had the homework assignment of writing a letter to the main character, consoling him for the death of his beloved hound. (Oh, by the way, retroactive spoiler alert there; my bad.)

Dear Billy,
Don’t be sad.
God took your dog away from you.
He knew that was better.

Ka-pow! Of course my favorite fifth-grader’s mom (this is getting complicated) intervened to help him think through his tender words of consolation. What if Billy had never thought through the fact of God’s providential control over the course of events? Is now the right time to get him started? What if the words “God took your dog away” just sound cruel? Fifth grader’s eyes widen as he realizes that his words might sound totally different from how he meant them…

The final draft was much better (reversing the sequence of the sentences, if nothing else), but what Billy’s comforter came up against here is a perennial pastoral problem: How much do you tell sufferers, and in what order, and in what way?

There’s a classic answer to the question in the history of western thought, and it’s found in the sixth-century book The Consolation of Philosophy by Boethius. Boethius the author writes himself into the story as Boethius the character, unjustly imprisoned and lamenting his ill fortune. He is in despair, wishing he’d never been born. The first page of the book is an emo song about how awful life is.

Suddenly, in the first prose sentence of the book, Lady Philosophy shows up and counsels him. The rest of the book is a dialogue between these two: Suffering Boethius, who can’t see the reasons for anything, and Lady Philosophy, who knows how to help.

She starts him out with music, to calm him down. She has to get his mind off his immediate situation,which has slammed shut the whole horizon of the world for him. After a lot of sweet persuasion and beautiful poetry, mixed with a few arguments here and there, Philosophy asks Boethius if his mind is still sunk so low. He replies,

All that you have said is certainly plausible and well sugared with the sweet honey of rhetoric and music. But it is only while one is actually listening that one is filled with pleasure, and for the wretched, the pain of their suffering goes deeper. So as soon as your words stop sounding in our ears, the mind is weighed down again by its deep seated melancholy.

Silly boy, says Philosophy. Of course the effect is limited. “None of this is meant to be a cure for your condition, but simply a kind of application to help soothe a grief still resistant to treatment. When the time comes, I will apply something calculated to penetrate deep inside.”

To get the medicine, you’ll have to read Boethius. This is just an advertisement for The Consolation of Philosophy, a little book (not much more than a hundred pages) that has been translated and treasured by kings and queens and Chaucer. C.S. Lewis says you should read it. Greg Peters says it informs his pastoral counseling, even though it’s a book whose Christian author conceals his specifically Christian warrants.

But until you get a chance to read it or re-read it, here’s some immediate value from the basic plot summary: Lady Philosophy starts with the easy stuff, but doesn’t stop until she’s shown Boethius the ultimate truth of God’s sovereignty. The only medicine that can cure his disease is the strong stuff. As they work their way from one dose to the next, and Boethius begins to see that things happen for a reason, he cries out, “What grounds are there for distinguishing between God and the haphazards of chance?”

“You are urging me to the greatest of all questions, a question that can never be exhausted. The subject is of such a kind that when one doubt has been removed, countless others spring up in its place, like the Hydra’s heads. The only way to check them is with a really lively intellectual fire. The usual subjects of inquiry concern the oneness of providence, the course of fate, the haphazard nature of the random events of chance, divine knowledge and predestination, and the freedom of the will; you can see for yourself how difficult they are.”

But no other medicine will do for the suffering, provided it is administered skilfully, in the right doses, and leaving time for the patient to gather strength.