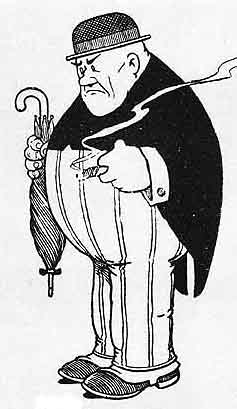 Everett True was a cartoon character in the first couple decades of the twentieth century. He looked like some kind of middle class Winston Churchill, portly, bowler-hatted, and always armed with an umbrella. The joke in the Everett True comics –there was really only one joke– is that True didn’t put up with all the nonsense the rest of us put up with. When he was provoked by one of the countless indignities that beset modern city life, he struck back instantly. As the preface to the book of Everett True explains,
“We’re all of us mollycoddles –more or less.” But

Everett True lacks our weakness in treatment of the human pest. He is a living protest against the incarnate irritants that are with us always. He is not a reformer, but rather an executioner, inflicting punishment where he comes in contact with fit subjects of penal treatment.

You really have to see True in action to believe it. Barnacle Press has a great stock of True strips available online.

True’s main way of striking back was with sheer physical violence. He punched obnoxious salesmen in the nose, threw lapdogs out bus windows, shook busybodies vigorously, and beat pretty much everybody over the head with his umbrella.

In this strip, True senses that he is about to be conned into buying inferior merchandise by the counter man, so he pummels him mercilessly. If you don’t think that’s funny, or if you thought it was funny but you’re already tired of it, stop reading now. Because that same old two-step is all you get in The Outbursts of Everett True: Somebody dishes out insult, and True responds with injury.

Everett True also tries to counter-insult, but usually it’s a less-than-clever turnabout like “Oh, throwing trash down, are you? I’ll throw YOU down, you trash!” That might be “so dumb it’s funny,” but it’s not funny in any straightforward way.

On the other hand, True is a living lexicon of vituperation and invective. When it comes to slang insults, nobody can swear like True. When was the last time you read an insult as dense as “Dry up, you mountebank! I know the rest of your song!” In one strip, he calls his dentist a “gossipy lobster,” which is as near-perfect an insult as you’re ever likely to hear.

Quite often, True is not just being cranky about a personal mis-treatment, but is instead striking a blow for civilization and good conduct in the abstract. In fact, he frequently comes to the aid of the defenseless, as when he sees a man beating a dog for no good reason (“I’ve been waiting for a chance to train the likes of you for a long time!”), catches somebody smoking in a crowded elevator (“I hope you find a place where you can’t do anything but smoke!”), or steps in to prevent men from ogling the ankles of young women crossing the street. It’s great that Everett True takes a stand for public decency by kicking the lascivious young men into the street, but what makes it work is the speech he gives:

I’d like to meet about two dozen of you windy corner rubber-necks every day! I’ll bet I’d soon break up the practice! You ought to have thirty days in the workhouse on bread and water, you contemptible pup!

Taking it to the next level, Everett True also had to correct abuses which look a lot like his own behavior. When an impatient man scolds a young newsie –a thing it’s easy to imagine True himself doing– True lays into him with umbrella and curse: “You want some humanity pounded into you!”

True’s attitude to women is a hard thing to watch. Though he has chastised men on buses for failing to yield their seats to ladies, in one strip he refuses to give up his seat for a woman he considers uppity, suffragist, and irresponsible. “If i were your husband I’d chain you to the house” is a hard line to follow.

But Mrs. True –yes, there is a MRS. Everett True– seems to give as good as she gets in a strip where the surprise ending has her calling him a “corpulent shrimp” and stranding him at home with the kids.

At one point in the 1920s, True took a swat at boring academic preachers, but he didn’t use any physical violence. He just thumped the bible by way of recommending it as superior the the pastor’s own meanderings. 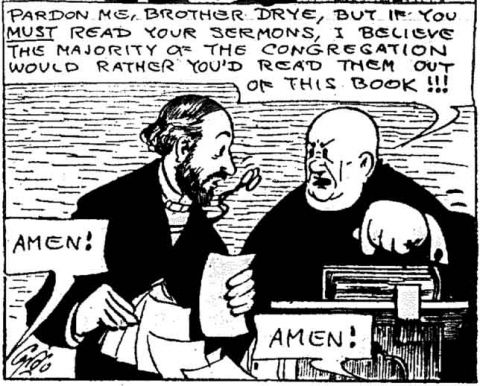 The editors of Biola’s magazine The King’s Business liked that idea so much that they reprinted it.

An ode to Everett True spelled out the appeal of this character with his outbursts:

Oh Everett True, Oh Everett True,
If we had a million or more like you
With shoulders broad and with jawbones grim
To keep the pests of the land in trim,
Things might seem so bright and fair
To practical jokers everywhere,
And boors and mashers might find that life
Was full of trouble and woe and strife
And cads might mutter and fools might fuss
But you’d hear no kick from the rest of us.

True’s constant sense of moral outrage reminds me of Al Jaffee‘s Snappy Answers to Stupid Questions, or more recently those good dairy products gone bad, Evan Dorkin’s Milk and Cheese. But The Outbursts of Everett True are from the very dawn of the century.