As the newest contributor to the Scriptorium Daily I fittingly have been asked to wish you all a Happy New Year. As a matter of introduction, I am Melissa Schubert, a professor of literature in the Torrey Honors Institute.

I am fascinated, especially at the turning of the year, by the ways that we keep, mark, and measure time. 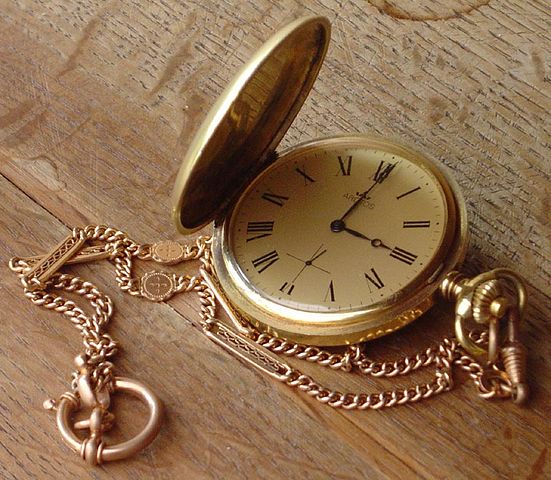 And how we experience its passage. Years seem much shorter to me as an adult than they did when I was a child. I assume this is because the proportion of year to lifetime continues to diminish. My friend’s three-year-old daughter has only two categories for time past: “yesterday” and “when I was a little girl.” Most of us live by the minute with our countless timepieces. I don’t even wear a watch or carry a cell phone, but my e-mails are time-stamped and even my iPod tells time. We speak of saving, spending, wasting, investing, and budgeting our time, as if we believe the cliche that time is money. When I lived in hearing distance of a bell tower I started to learn what the space of fifteen minutes felt like. In busy seasons, I start to feel like Eliot’s Prufrock, who had “measured out [his] life in coffee spoons,” but wish I were Theodore Roethke, so that I could “wake to sleep, and take my waking slow.”

We divide our days into hours, minutes, and seconds. Our sixty-second minutes and sixty-minute hours follow the ancient sexagesimal counting systems, and our twenty-four hour days follow the also-ancient duodecimal. But we mark decades, centuries, and millennia by our more familiar decimal system. Our calendrical system attempts to comprehend the relationship between our planet, its moon, and the sun in months and years. We affirm order in the relationship between the earth and celestial bodies. Our seven-day week imitates the biblical creation story in the Judeo-Christian tradition. The week seems the most religiously significant unit of time also because it preserves a pattern for public worship as well as divinely-ordained rest.

Of course, it’s not as though there is or has been universal agreement about these things. Our own system is certainly hybrid, and its chosen measures exclude others. And knowing we could do otherwise helps me to see the significance of how we do measure time.

Each choice seems densely meaningful. For instance, what are a day’s boundaries? On the one hand, we refer to the period between dawn and dusk as day and the rest as night. Still, nighttime is not given its own territory, but is, rather, made part of day. The ancient Romans regarded each noon as the beginning of a new day, believing the sun’s (and Jove’s) full reign to be the golden beginning of things. Jewish tradition maintains that the day begins at sunset following the Genesis account that “the evening and the morning were the first day.” But our clocks mark the beginning of the day at midnight; our day changes in the middle of the night.

And our year is similar. Other calendars have maintained spring as the first season of the year, celebrating the New Year in March. In the beginning, birth, and the end, death. Blossoms and buds mature into fruit, which are harvested and consumed before plants are covered in cold and dark. Additionally, tradition has maintained March twenty-fifth as both the day of the Annunciation and of the Passion. Until the adoption of the Gregorian calendar, most European countries (and the American colonies) celebrated the New Year on this very day. The Jewish New Year Rosh Hashanah, on the other hand, is celebrated in the fall, at the time that Jewish tradition maintains the earth was created. The earth, then, was in its first moments at harvest, and every year begins in ripeness. But our year, against better intuitions, begins in the middle of winter.

Thus, New Year’s Day comes upon us both in the dead of the night and in the dead of winter. We welcome the new while we’re cold and in the dark. If we were sleeping (which would be only natural), we would wake and the new year would have already come. It is as though the year will sneak in, and we have to keep vigil to see its arrival.

New Year’s follows Christmas so closely that I can’t help but think of it analogously. So many of our carols make much of the mid-winter and nighttime birth of Jesus. Christina Rosetti’s poem-turned-carol seems to set the stage for anything but the Incarnation, making it clear that Christ broke in to a painfully cold, dark, hard, and stark reality.

A German carol recalls the traditional imagery of Christ as a Rose.

Lo, how a rose e’er blooming,
From tender stem hath sprung!
From Jesse’s lineage coming,
As men of old have sung.
It came, a floweret bright,
Amid the cold of winter,
When half spent was the night.

But we all know that flowers do not normally bloom bright in the cold of winter and the dark of night. In fact, Christian tradition has appreciated the rare species that do as reminders of the Nativity.

These tropes of time and season do not simply suggest that the Incarnation was unexpected and surprising. Rather, our Lord’s advent so radically interrupted our slavish movement toward death and destruction. He shone like light when darkness threatened to overwhelm us. He renewed us to life when it seemed least timely, but, of course, was in the fullness of time.

A few years ago I was cleaning out my first garden, readying it for the spring. The flowering plants had been prolific even through the fall in Southern California, but most were withered and shriveled by January. So I labored long and hard to uproot all the ostensibly dead plants. Come to discover—my sister was a more experienced gardener than I—I had thrown out countless dormant perennials. In springtime, these plants would have renewed their flowering with deeper roots than in the previous year.

Even now knowing the wonders of perennials, I am always tempted to uproot my dormant plants and replace them with new ones, sometimes out of anxiety that they won’t actually bloom again and sometimes simply impatient for their renewal.

But our calendar teaches me that the new comes not in March when the trees are budding but right now even while my plants seem dead. Of course, they are just sleeping. And the new is coming to them in the dead of night, and in the dead of winter, just as it comes to us. Happy New Year, indeed!