I usually keep quiet my liking for musical theater. But this summer I discovered that what I took to be my uniquely under-refined taste is actually common in my eccentric community. On a sailboat moored along the Turkish Coast of the Aegean Sea, I sang along to the Wicked soundtrack with nearly twenty students who knew the lyrics better than I. 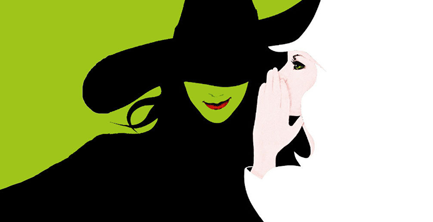 The wildly popular musical, based on Gregory Maguire’s novel of the same title, tells the “untold story of the witches of Oz.” A faux prequel to L. Frank Baum’s The Wonderful Wizard of Oz, the novel recounts the high school years of Galinda and Elphaba, the future Glinda the Good and Wicked Witch of the West, respectively. The story unveils Elphaba as green-skinned, marginalized, and principled, and Glinda as pretty, privileged, and popular.

In an Oz where politics and social capital reign supreme, Neitszche’s speculative history of morality obtains when the powerful use moral language to secure further power. Elphaba is Galinda’s moral superior for at least the first half of the musical. But when Elphaba’s non-conformity threatens the powers-that-be, she takes flight. Oz’s Press Secretary publishes the myth by which Elphaba becomes “Wicked” and the Wizard officially declares Glinda “the Good.” Wicked is Oz’s revisionist exposé.

Stephen Sondheim’s musical Into the Woods reshapes the material of folk tales with a similar thrust. The clever story weaves the narratives of Little Red Riding Hood, Jack (of Beanstalk fame), Rapunzel, and Cinderella, together with those of a Baker, his wife, and a Witch. The whole ensemble suffers many ordeals to secure their wishes and ends the first act having arrived at their Happily Ever After. The second act opens with the same characters, possessing the goods they had wanted, still wishing for more. The story that unfolds complicates not only the glossy Disney renderings of the tales contained, but also their darker and more original versions.

Ours is a suspicious age. We distrust stories because the powerful write them. History’s winners, after all, are the folk who can demonize their enemies to justify themselves with impunity. And while there is some room for such suspicion, I suspect we have gone too far in it. There is a timely chastisement for the spirit of our age in Kierkegaard’s preface to Fear and Trembling: “What those ancient Greeks, who also surely understood a little about philosophy, assumed to be a task for a whole lifetime because proficiency in doubting is not achieved in a matter of days and weeks…with that everyone in our age begins.”

Certainly, history is more complicated than fairy tales, wherein the good are entirely good and the wicked, entirely wicked. But, in an attempt to demonstrate the moral ambiguity of the world, Wicked and Into the Woods threaten to undermine the very forms by which we might apprehend and convey moral clarity.

The world rendered in fairy tales may resemble more closely all the eschatological and ontological fullness for which our world groans. In them, wheat and chaff are separated, dragons are slain, princes and princesses marry, and all live happily ever after. But the fairy-tale accounts are feeble to account for this-worldly experience. On this terrestrial ball beautiful women have character flaws and brave men fail the test of courage. Those who would be on the side of the good often unwittingly serve its enemy. In this realm with all its ambiguity, narratives of suspicion are often powerful to expose the truth.

Notably, both narratives betray a desire for judgment. Within the fairy tale, the good are rewarded and the wicked punished. The narrative of suspicion performs judgment by exposing the villain and garnering sympathy for the victim. Punishment for evil is softened to the shame of exposure, but it is punishment nevertheless.

This desire for judgment finds its expression throughout literature. I think of the Sophocles’ Oedipus plays and Aeschylus’ Oresteia, Homer’s Odyssey, the book of Job, Milton’s Samson Agonistes, and Faulkner’s Absalom, Absalom! And I most recently encountered it in Shakespeare’s The Tempest.

In this play that considers so deeply the use and renunciation of power, there is both execution and stay of judgment. Prospero’s magic is a multivalent figure that seems to relate to his powers, whether paternal, political, linguistic, aesthetic, or even supernatural. One of Prospero’s strongest desires is the punishment of his enemies. And he appears able, by his powers, to execute both judgment and punishment, to reward his friends and punish his enemies.

But when the spirit who serves him, Ariel, reports to Prospero the effects of his punitive charms upon his enemies, he enters into sympathy for those whom he is judging:

Ariel: Your charm so strongly works ’em,
That if you now beheld them your affections
Would become tender.

Prospero: Dost thou think so, spirit?

Ariel: Mine would, sir, were I human.

Prospero: And mine shall.
Hast thou, which art but air, a touch, a feeling
Of their afflictions, and shall not myself,
One of their kind, that relish all as sharply
Passion as they, be kindlier moved than thou art?
Though with their high wrongs I am struck to th’ quick,
Yet with my nobler reason ‘gainst my fury
Do I take part. The rarer action is
In virtue than in vengeance. (V.i.17-28)

The ethereal, spiritual, alien, wispy Ariel is the first to suggest that Prospero relent his judgment. He is prompted to do so according to the kinship he feels with his enemies according to their shared humanity. His lust for vengeance is tempered when he remembers his likeness to those whom he judges. Immediately following this discourse, Prospero “abjures” his “rough magic” (V.i.50-51). He promises to relinquish the instruments of his powers, which, though intimately linked to forces of nature, give unnatural dominion to a human creature.

Only when Prospero begins to feel and to live in his creaturely finitude is he able to forgive the debts that others owe him. Only when he sees himself as of a kind with his enemies is he able to sympathize with them. He begins to resemble his daughter’s tender imagination that allows her to “suffer with those [she sees] suffer” (I.ii.5). Perhaps we can only feel with others when we recognize that we are like them.

There is a likeness to many of Prospero’s final deeds in the last scenes of The Tempest. They at once reflect both the renunciation of his tyrannical arts and the power of liberation and release: relinquishing magic, giving his daughter as bride, liberating Ariel, forgiving his enemies, even receiving Caliban back as his own. Prospero’s forgiveness of his enemies is simultaneously a judgment and a stay of execution. It offers, I think, a very happy ending, though, rather than live happily ever after, we suspect that the folk of Milan will only be perfectly well some of the time. And we have had hints that their reinstated duke won’t be perfect.

I suspect it is better not to choose between fairy story and narrative of suspicion, but to allow both to do their work. Let fairy tales remind us of the happy and transparent world to come. Let narratives of suspicion remind us of the opacity of this one. May they both increase our longing and our patience for the time when a righteous judge will expose the villain and vindicate the victim. Until that day, may we privilege forgiveness over vengeance according to our kinship with and sympathy for one another.