Today in 1873 Thérèse of Lisieux was born. Some Catholics call her The Little Flower, but DOCTOR Little Flower might be more appropriate. 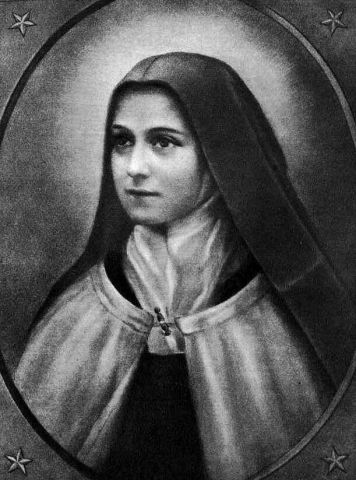 Born Marie-Francoise-Thérèse Martin as the ninth child of devout parents, she became a Carmelite nun at the unusually early age of 15. She only had about a decade of life as a nun ahead of her, as she died in 1897. By 1925 the Roman Catholic church declared her a saint.

Thérèse’s story is available in her popular autobiography, Story of a Soul. To read her life, you need to have a high tolerance for All Things Catholic: You can’t turn a page without running into rosaries, novenas, missals, visions of Mary, pilgrimages to Rome, and meditations on purgatory. This was the stuff of her life, both in her family of origin (many of her siblings had religious vocations, and both of her parents have been beatified and are considered candidates for recognition as saints) and of course in her Discalced Carmelite convent.

Within that context, it’s easy enough to picture how this quiet, uneventful life of a nun committed to prayer and service in a convent for about a decade could be recognized by the Catholic Church as grounds for declaring her a saint. In fact, among Roman Catholic laypeople, she has become one of the most popular saints in all history, jumping up into the ranks with Francis of Assisi and Antony of Padua. Even some pretty nominal Catholics can be heard invoking her supernatural help in the rhyming prayer they learned as children: “Little Flower In This Hour Show Your Power.” Pope Pius X called her the greatest saint of modern times.

But in 1997, something more extraordinary happened: John Paul II declared her to be a Doctor of the Church!

If “Saint” is the height of Roman Catholic recognition of holiness, then “Doctor of the Church” is an even more exclusive club (only 33 in it), a kind of saintly super-teacher. It’s the highest recognition the Catholic Church can give to a teacher. It means that this person has taught something so well and so clearly that everybody ought to pay attention to the lesson.

John Paul II declared dozens of saints during his time as pope, but only one doctor: Thérèse of Lisieux. He made the declaration in 1997, in a letter called Divini Amoris Scientia (“The Science of Divine Love”).

Swiss theologian Hans Urs von Balthasar had seen this coming, apparently. In 1950 he published a book (translated in 1954 as Thérèse of Lisieux: The Story of a Mission) in which he argued that the kind of theology Thérèse learned and taught was not theoretical but existential: she lived out a specific truth. She didn’t enjoy reading or studying, and except for the Bible she was only really deeply influenced by a handful of books like The Imitation of Christ and some works by John of the Cross and her namesake, Teresa of Avila. But, as Balthasar says, what she had to teach was not about sources and footnotes:

Her teaching is not a theological system of propositions held together by inferences; it is an immediate, total vision, and on that account requires many different forms for its exposition. And however important it may be to understand the exposition it is even more vital to grasp the original power of the vision.

John Paul II would echo this in his letter Divini Amoris Scientia: “Even though Thérèse does not have a true and proper doctrinal corpus, nevertheless a particular radiance of doctrine shines forth from her writings which, as if by a charism of the Holy Spirit, grasp the very heart of the message of revelation in a fresh and original vision, presenting a teaching of eminent quality.”

The central idea that Thérèse lived out is what she called “the little way.” In Roman Catholic piety there are various models of heroic sainthood, but Thérèse turned from those and pursued a life that is remarkable for its unremarkableness. She didn’t seek any special opportunities for exercising virtue, she just accepted what came to her as being from God’s hand. As John Paul II said, “Through spiritual childhood one experiences that everything comes from God, returns to him and abides in him, for the salvation of all, in a mystery of merciful love. Such is the doctrinal message taught and lived by this Saint.”

In the first pages of her autobiography, Thérèse explains herself:

I saw that all the flowers He has created are lovely. The splendor of the rose and the whiteness of the lily do not rob the little violet of its scent nor the daisy of its simple charm. I realized that if every tiny flower wanted to be a rose, spring would lose its loveliness and there would be no wild flowers to make the meadows gay. It is just the same in the world of souls –which is the garden of Jesus. He has created the great saints who are like the lilies and the roses, but He has also created much lesser saints and they must be content to be the daisies or the violets… I believe that if a little flower could speak, it would tell very simply and fully all that God had done for it… The flower who is now going to tell her story rejoices at having to relate all the kindnesses freely done her by Jesus.

For the rest of Thérèse’s teaching, her self-exposition of her life in Christ, it’s best to read her autobiography. I have already warned you that it is ostentatiously Roman Catholic, and now you can see that it is more than a bit treacly. Even Balthasar and other admirers of Thérèse admit that her sanctity did not magically lift her above a cloying sentimentalism in her way of expressing herself. Maybe this is how a real follower of the little way of spiritual childhood would inevitably write. Maybe it really is how a little flower would talk. At least it’s how Thérèse wrote.

But if you compare this “little flower” paragraph with, say, anything by Thomas Aquinas, you get the shock of contrast: Both are considered Doctors of the Church. You could write a Summa Theologica, or you could write the confession of a little flower. Take your pick.

Reading Thérèse of Lisieux is hard work for those of us with real Protestant commitments and sensibilities. But if you’ve never looked into her work, it’s worth trying. Because here’s one big lesson from the little way of Thérèse: The way you handle little, daily irritations and opportunities is a big deal. That little stuff could be the stuff of holiness, of following Jesus, and of profound learning.