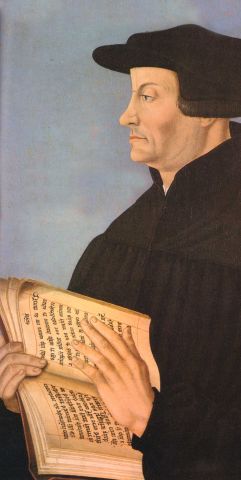 Today in 1484, Swiss reformer Ulrich Zwingli was born, about 40 days after Martin Luther. Zwingli was a well-trained scholar (Universities of Vienna and Basel) and had the early reputation of being the best Greek student north of the Alps. But he was essentially a man of action, and when he began his preaching ministry in Zurich (on his Birthday, January 1, 1519), he announced a plan to preach and teach straight from the Bible.

That’s when things started happening: People who once thought that the eleventh commandment was to fast from meat during Lent began to realize that such traditions are not absolute, not scriptural, and not necessarily helpful. Zwingli’s preaching turned on the lights for many in Zurich and beyond.

Zwingli is a hard person to do justice to: He is most famous for teaching that the Lord’s Supper is only a sign showing that Christ died for us and that we receive him by faith. He and Luther argued at length about this, with Luther defending a thicker sacramentalism. On the other hand, Zwingli believed in infant baptism and reacted very strongly against the suggestion that adult believers should be rebaptized. He sometimes argued like a rationalist or humanist, thought that righteous pagans like Plato and Cicero were in heaven, and died in a military battle as a Swiss patriot. He designed a training system for pastors that emphasized mastery of the biblical languages and expository preaching. His big book on True and False Religion is alternately maddening and thrilling.

When he was good, he was very very good; but when he was bad he was horrid.

Anathematized by Rome, excoriated by Luther, averse to the Anabaptists, and soon overshadowed by Calvin, a tough case like Zwingli should be allowed to speak for himself. Here are the first 16 of his 67 brief articles for the Zurich Disputation, delivered on Jan 22, 1523. This was a public disputation at which the city leaders were going to decide whether to seek serious reform in their way of being Christians. Zwingli, having spread out Hebrew, Greek, and Latin Bibles in front of him, won the day and moved the city to reform.

I. All who say that the Gospel is invalid without the confirmation of the Church err and slander God.

II. The sum and substance of the Gospel is that our Lord Jesus Christ, the true Son of God, has made known to us the will of his heavenly Father, and has with his innocence released us from death and reconciled God.

III. Hence Christ is the only way to salvation for all who ever were, are and shall be.

IV. Who seeks or points out another door errs, yes, he is a murderer of souls and a thief.

V. Therefore all who consider other teachings equal to or higher than the Gospel err, and do not know what the Gospel is.

VI. For Jesus Christ is the guide and leader, promised by God to all human beings, which promise was fulfilled.

VII. That he is an eternal salvation and head of all believers, who are his body, but which is dead and can do nothing without him.

VIII. From this follows first that all who dwell in the head are members and children of God, and that it is the church or communion of the saints, the bride of Christ, Ecclesia catholica.

IX. Furthermore, that as the members of the body can do nothing without the control of the head, so no one in the body of Christ can do the least without his head, Christ.

X. As that man is mad whose limbs (try to) do something without his head, tearing, wounding, injuring himself; thus when the members of Christ undertake something without their head, Christ, they are mad, and injure and burden themselves with unwise ordinances.

XI. Hence we see in the clerical (so-called) ordinances, concerning their splendor, riches, classes, titles, laws, a cause of all foolishness, for they do not also agree with the head.

XII. Thus they still rage, not on account of the head (for that one is eager to bring forth in these times from the grace of God,) but because one will not let them rage, but tries to compel them to listen to the head.

XIII. Where this (the head) is hearkened to one learns clearly and plainly the will of God, and man is attracted by his spirit to him and changed into him.

XIV. Therefore all Christian people shall use their best diligence that the Gospel of Christ be preached alike everywhere.

XV. For in the faith rests our salvation, and in unbelief our damnation; for all truth is clear in him.

XVI. In the Gospel one learns that human doctrines and decrees do not aid in salvation.