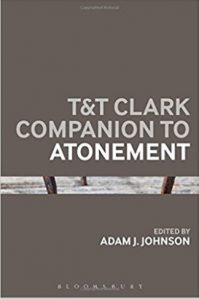 Adam Johnson’s T&T Clark Companion to Atonement has just dropped like the hundred-plus chapter, hundred-plus dollar behemoth that it is. More on that later.

For now I’m just posting an excerpt from the chapter I wrote for it, entitled “These Three Atone: Trinity and Atonement.” It’s the first chapter in the volume after the editor’s substantive introduction, and I decided to handle the subject(s) in a very broad way. In fact, what I attempted was to take up Johnson’s own previous work (here, here, and here) and engage it constructively.

It is hard to delineate the boundary between the doctrines of Trinity and atonement because each doctrine, taken at its most expansive, makes such heavy requisitions from the other. Unless material from each field is featured prominently in the other, neither doctrine can be developed properly. Not even in the darkest ages of modernism did the situation ever quite degenerate into Trinity versus atonement; rather the two doctrines have tended to thrive or wilt in unison. These are not two hostile doctrines that stand in need of reconciliation to each other (to use language from atonement doctrine), nor are they simply the same subject matter subsisting distinctly in relation, or indwell each other perichoretically (to use language from Trinitarian doctrine). Calibrating them to each other is a major task for any systematic theological vision, and expounding them in due proportion is a true test of any theologian’s sagacity.

The obligation of the doctrine of the Trinity is to be a doctrine about God, which certainly ought to give Trinitarian theology more than enough work to keep it occupied. In fact, it is incumbent on Trinitarian theology to be a doctrine concerning God’s eternal, essential being in a way that distinguishes itself from doctrines about God’s outward actions: it concerns who God is rather than what God does. There must be something of a sola in Trinitarian doctrine, a protest that preserves this doctrine from being reduced and relativized. After we have said all we must say (and there is much) about the doctrine as a mystery of salvation, a map of our participation in the divine life, the structuring grammar of an ecclesial encounter with God, the pattern of God’s ways in the world, and so on, we must recall that the triune God has a self- sufficient life of his own, which is occupied with more than just being the transcendental referent of that mapping, structuring, and patterning. In the doctrine of the Trinity we are at all times speaking of a God who would already have been fully actualized even if he had never undertaken those actions which constitute him as the three-personed mystery of salvation. To omit this note of distinction is to expose all the other content of Trinitarian doctrine to the risk of being merely a congeries of observations about what happens in the course of human events. A god entangled in world process by bands of necessity is a god dissolved and lost into world process.

Yet Trinitarian theology necessarily canvases a broader theological field, drawing at least from Christology and pneumatology if it is to have anything at all Trinitarian to say about God. It does not just add the doctrines of an eternal Son and an eternal Spirit to a doctrine of God, but fetches what it knows of their identities from the incarnate, crucified, risen Savior and his outpoured Spirit. That is, Trinitarian theology is an interpretation of the work of atonement. It takes up all the material of salvation history together as a whole and places it against the horizon of God’s eternal being, in order to specify the Christian God by describing the connection between God and the economy of salvation. All the other work of the doctrine of the Trinity flows from this basis in the economy. It speaks about the eternal, triune being of God on the basis of that God’s self- revealing works and words in the world.

Well, that’s at least how I release the hounds. After that I explore the two undesirable alternatives of each doctrine consuming the other without remainder, and finally I propose the right perspective from which to view these two mega-doctrines.