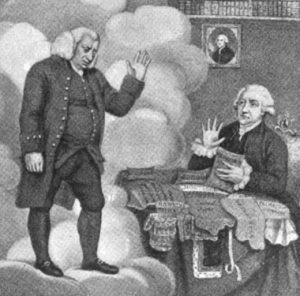 One of the amazing things about Samuel Johnson’s writing style is his ability to reduce any idea to an aphorism, a fresh little proverb that arises perfectly from the situation in front of him but reaches up to the heaven of abstraction.

Just about any page of Johnson will serve to illustrate this Johnsonian quality. But I recently came across a very rich example. It’s a letter that Johnson wrote to Boswell in March of 1774. The letter is only around 600 words long, and in it Johnson has to conduct a little bit of business and exchange a few greetings. But mainly he is writing because Boswell is making a plan to come from Edinburgh (where Boswell lives) to London (home of Johnson).

Johnson thinks this trip is a bad idea, and is talking Boswell out of it. “The reasons for which you are inclined to visit London, are, I think, not of sufficient strength to answer the objections,” he says. Apparently the trip was going to cost a lot, and be a burden on Boswell’s family. And one of the reasons Boswell apparently put forward most urgently was that he wanted to worship God in London, perhaps at a particular church where he had developed a tradition of special observances.

All of this requires careful handling. One false move and Johnson may give poor Boswell the impression that he is not welcome, or that his old friend has no desire to see him.  Johnson also thinks Boswell may be in danger of neglecting his wife, and of leaving her with too much work to do in his absence (he had recently been away on a long trip already). And as for Boswell’s religious impulse: Johnson clearly thinks it runs the risk of superstition, but doesn’t want to be discouraging about sacred matters.

As Johnson considers the subject, he makes his points directly, but he also intersperses a large number of sententious maxims. Here are some of them:

“Both information and pleasure must be regulated by propriety.”

“Pleasure, which cannot be obtained but by unseasonable or unsuitable expence, must always end in pain.”

“Pleasure, which must be enjoyed at the expence of another’s pain, can never be such as a worthy mind can fully delight in.”

“You ought to study the happiness of her who studies yours with so much diligence.”

“Life cannot subsist in society but by reciprocal concessions.”

‘If the annual resort to Jerusalem was a duty to the Jews, it was a duty because it was commanded; and you have no such command, therefore no such duty.”

“It may be dangerous to receive too readily, and indulge too fondly, opinions, from which, perhaps, no pious mind is wholly disengaged, of local sanctity and local devotion.”

“I am now writing, and you, when you read this, are reading under the Eye of Omnipresence.”

“‘To what degree fancy is to be admitted into religious offices, it would require much deliberation to determine.”

“Fancy is a faculty bestowed by our Creator, and it is reasonable that all His gifts should be used to His glory, that all our faculties should co-operate in His worship; but they are to co-operate according to the will of Him that gave them, according to the order which His wisdom has established.”

“We may take Fancy for a companion, but must follow Reason as our guide. “

What is going on here? No doubt Johnson liked to hear himself talk, and no doubt his style is sententious in the more modern pejorative sense as well as the older positive sense. But by resorting to proverbs of more or less universal observation and application, Johnson is placing Boswell under the covering of universal norms of reasonableness. There is something public and open to judgment about Johnson’s points when he phrases them proverbially.

Johnson also makes private and particular comments. For example, he points out that Mr. and Mrs. Boswell really need to take turns having their way,  and that Mr. Boswell is hogging his turn. “She permitted you to ramble last year, you must permit her now to keep you at home.” That strikes me as a kind of private reasoning that applies very well to Boswell’s recent past, and his relationship with his wife in current circumstances. But Johnson goes on: “Life cannot subsist in society but by reciprocal concessions.” This sentence elevates the affairs of the Boswell household into the broad daylight that we all share. When Boswell stays home because it pleases his wife, he is taking his place under the general maxim that explains how all social life must function: It only works by “reciprocal concessions.” Suddenly the Boswell household is a local exemplification of a universal truth, a little Republic in which the orderly Republic as such is instantiated.

We need to find ways to speak to each other like this. Humans are obliged to treat their fellow humans as fellow participants in great universal truths, so that we can see each other in light of things bigger than us.

We also need to find ways to think in sentences as long, as orderly, as balanced, as those of Samuel Johnson. The style appropriate to 21st century sensibilities will be different from the style appropriate to the 18th. We can hope it’s less pompous and dilatory. But we can also hope it is a linguistic tool that enables us to arrange and weigh competing goods, to trace them to their origin, and to place them under a common good and a sky of self-evident truths available to many cultures and life settings. It would be an obvious corrective to the degrading, choppy discourse that drags down contemporary conversations about the things that matter.