I’ve stopped saying “Just before he ascended into heaven, Jesus gave his disciples the Great Commission.” Here’s why:

When I teach about the Great Commission (Matt 28:18-20), I underline its importance by showing that these are the last words Jesus speaks at the end of the gospel of Matthew. I love to explore how ideas and motifs from the beginning of the gospel are fulfilled here: the angel tells us at the beginning of Matthew that Jesus’ name will be Immanuel, God with us, and here at the end Jesus assures us, “I am with you always.” I love to point out that the language of “the Father and the Son” in the Great Commission builds on Jesus’ teaching in Matthew 11 (“No one knows the Father except the Son,” etc.).

The Great Commission, especially with its ringing trinitarian formulation, sometimes strikes us as a surprise ending to the gospel, but in fact it’s a fabulous consummation of leading ideas in the book. It’s how the gospel of Matthew ends with a bang. To see this is to see that all 28 chapters are part of the trinitarian gospel message that finally comes to articulation at the end. 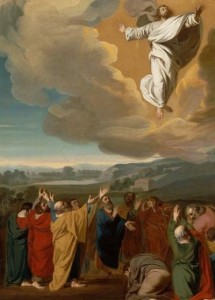 Over the years of teaching on this passage, I have also developed a habit of saying that these are the last words that Jesus says before he ascends into heaven. It sounds more dramatic to put it that way: that his death and resurrection are behind him, he has spent 40 days with the disciples, and is now going to the Father. And his final words are the command to make disciples.

But here’s the problem: When I put it that way, I jump from Matthew to Luke. I cut the lines of argument that Matthew has carefully laid out, or I tangle them with the ascension story that is so crucial in another gospel, Luke’s gospel.

No, I mean I really don’t know, it’s beyond me. I can name and describe a few of the dynamics of Matthew. But I can never be sure I’ve seen everything, because it’s holy, and deep, and written by two authors (one human, one divine) who are way ahead of me.

But one thing I’ve noticed is that Matthew does not end his gospel with the story of the ascension. His gospel is about God being with us in Christ, and it ends with… God being with us in Christ. He stands there and says, “I am with you always.” Wouldn’t it be a little silly if he had said this and then had flown away? Wouldn’t that be the wrong way to conclude? Wouldn’t that be a worse ending for a gospel that has emphasized how God is present among us in the person of Jesus? Doesn’t Matthew have to end with Jesus standing exactly there, as the narration just stops?

By innocently jumping from one gospel to another, I’ve been messing up the flow of thought of at least one of them. What I ought to do is be more careful about how I embellish the biblical accounts of things. I need to attend much more closely to what the Spirit is saying in the words of each biblical book.

I think of this as learning to trust the words and thought-patterns of scripture. I want to swim with the current that is flowing through Scripture, not across it. If I can stay consistent with Matthew’s way of thinking and talking, I can be in a position to pick up all kinds of momentum and nuance from what the Holy Spirit has planned and put in place in that book. If I jump from one frame of reference to another, my arguments may only be as good as I can make them with my own clever connection-making. But if I’ve got the current of Matthew behind me, I may say something that can hit an audience with a power greater than my own words or insights.

Of course by comparing the two gospels, we are able to say that, historically speaking, Jesus must have said these words and then later ascended. That’s how the end of Matthew and the end of Luke can be harmonized. That must be how it actually happened in history. But by presenting it that way, I am opting out of the stories told by both Matthew and Luke, and am preferring a historical reconstruction of my own making. Even though it’s a pretty good reconstruction, it’s not divinely inspired. So it could be faulty, and it will certainly be weak in comparison to God’s word.