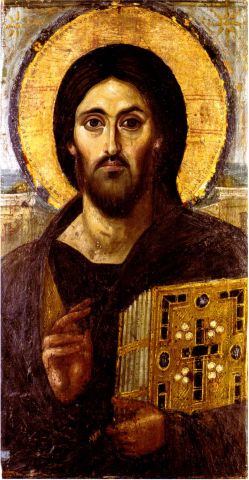 The following remarks should be considered as an extrapolation of certain lines of thought suggested by Manolis Chatzidakis’s seminal article “An Encaustic Icon of Christ at Sinai” published in The Art Bulletin (Vol. 50, No. 1, 113. Mar. 1968), 197-208. My own modest contribution to the critical discussion does not proceed using the modes of discourse valorized by the kunstgeschichtliche guild, but rather by the manipulation and juxtaposition of digital images.

There, that ought to be enough of the ol’ scholar-drone to keep most of the world from clicking through to read the rest of this post. This isn’t for just anybody. But if you’re still with me, here’s something weird and cool. There’s a very important painting of Jesus Christ that was made in the sixth-century using a waxy-paint medium called encaustic. It’s in the possession of the monastery of St. Catherine at Sinai, way out in the middle of nowhere, which is why it survived the waves of (Christian and Muslim) iconoclasm that wiped out so much of the first several centuries of Christian art.

Art historians have written a lot about this image, especially pondering how widespread images like this must have been. If you ever see the giant pictures of Jesus up in the domes of middle-Byzantine churches, you’ll notice some obvious similarities. There has also been a great deal of analysis of the condition of the image, and its restoration.

But the oddest thing about this image of Christ is the way the two sides of Christ’s face are so markedly different from each other. I’ve heard this explained as showing human and divine natures, or death and resurrection, or other dual truths about him. I tend not to believe these explanations, which sound too much like pious retconning. The asymmetry is due to purely visual conventions. If you spend some time looking at comparable ancient images like Fayoum portraits, you can see the same artistic techniques producing very similar effects.

Still, the difference between the two sides of this face is arresting. I was talking with a friend about this recently, and to prove that I wasn’t exaggerating the contrast, I produced the following visual aid. First, I took the left side of the image and “butterflied” it, mirroring it to the right. The result: 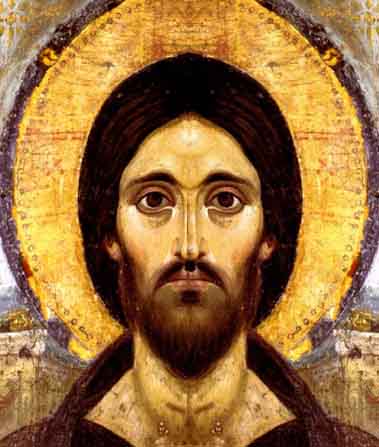 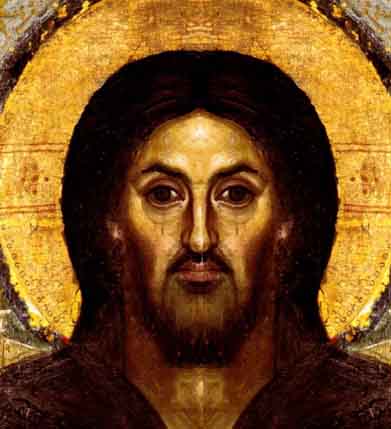 Actually, on a serious note regarding the art (not the theology): this little visual exercise in forced symmetry is truly helpful. Viewing the three images together highlights the flaws in the painting’s portraiture: the facial mask is oddly placed on the implied skull, and the eyes are not quite sharing the same plane with each other. This is worth noticing because the immediate impact of the portrait is so psychologically powerful that the viewer, I think, credits the image with much more realism than is actually present. That projected realism collides with the portrait’s flaws (both its skull-to-facemask discrepancy and its asymmetry). The result is a kind of visual vibration effect. It is analogous to the sensation produced when moderns look at the reversed perspective used in later byzantine iconography. This may be an insight into some of the visual effects of pre-iconoclastic Christian art after all, but mostly it’s just something I did with photoshop while trying to understand the image.