There is a very close connection between The Fundamentals (published 1910-1915) and Biola’s magazine  The King’s Business (published from 1910-1970). One way to describe that connection is to say that they grew from the same root: from the same editors and funders during the same period. Another way to describe it is to say that The Fundamentals turned into The King’s Business. Here’s the story.

The Fundamentals were a series of 12 books published by the Testimony Publishing Company of Chicago, Illinois, and mailed free of charge to a wide audience. They contained 90 chapters by dozens of authors from all across the Protestant denominational spectrum, but all united in their opposition to liberal modernism, and all concerned to propagate reliable biblical and doctrinal teaching.

The money for this vast educational enterprise came from “two concerned laymen” who remained anonymous throughout the publishing period. The Testimony Publishing Company came into existence only for the purpose of publishing The Fundamentals. But those two laymen were in fact Lyman Stewart and his brother Milton Stewart, oil millionaires and Christian philanthropists.

Meanwhile, in his spare time, the astonishingly productive Lyman Stewart was starting the Bible Institute of Los Angeles, complete with its journal, The King’s Business. The King’s Business always promoted The Fundamentals and helped spread the word about them. In December of 1912, KB published a letter from the Executive Secretary of The Fundamentals, Louis Meyer, providing facts and figures on the progress of the series (which had reached nine volumes by this date). At the same time, The King’s Business announced its intentions to be “enlarged and improved” beginning in 1913: 48 pages per month, with more news and editorials of general interest to a larger audience of evangelicals. With the benefit of hindsight, it seems likely that discerning readers could tell how much the interests of The Fundamentals, the Bible Institute’s magazine, and the generosity of the visionary Stewarts were aligned. I wonder if anybody guessed that Lyman Stewart was the moving force behind both publications? 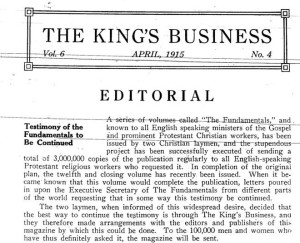 But the connection was made explicit when The Fundamentals finished its course of publication. Volume 12 had appeared, under the editorial guidance of R. A. Torrey (world-travelling evangelist who had become Biola’s high-profile academic dean that year). In the April 1915 issue of The King’s Business appeared an unsigned editorial announcing that the Fundamentals project would continue in its pages:

When it became known that this volume would complete the publication, letters poured in upon the Executive Secretary of The Fundamentals from different parts of the world requesting that in some way this testimony be continued.

The two laymen, when informed of this widespread desire, decided that the best way to continue the testimony is through The King’s Business, and they therefore made arrangements with the editors and publishers of this magazine by which this could be done. To the 100,000 men and women who have thus definitely asked it, the magazine will be sent.

The editors were able to offer a substantial guarantee that the contents of the magazine would be the same as the original publications: “It is planned that there will appear each month an article along the lines of The Fundamentals, written by the same men who wrote those articles or by men representing, with an equal ability, the same doctrinal point of view.” They listed names that were prominent in The Fundamentals, such as Dyson Hague, Griffith-Thomas, A.C. Dixon. In fact, “some of the manuscripts which have been submitted for publication in The Fundamentals, but which could not be used for lack of space, or because coming too late, will appear in The King’s Business.”