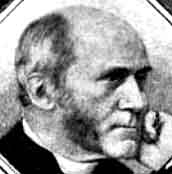 William Burt Pope (1822-1903) was a great British Methodist theologian of the 19th century. I’ve written an introduction to his thought and sung his praises here.

One of Pope’s strengths as a theologian is that he pondered so thoroughly the way each doctrine relates to all the others. This man thought through his theology backwards and forwards before he published! Here is my favorite example: Pope treats some doctrines twice, because he recognizes that you have to say everything up front, but that you also have to hold off until you’ve presented the cross.

Pope begins his 3-volume Compendium of Christian Theology with some preliminary matters, and then discusses first things first: God, his triunity, his attributes, and his glory. Everything in these discussions is solid, orderly, and well-placed. After these sections, he moves on to the doctrines of creation, humanity, (then in volume two) sin, christology, and salvation. He wraps up an excellent discussion (so biblical! so comprehensive!) of salvation with a section on “The Finished Atonement.” It’s at the end of this section that Pope makes a crucial move.

Though he already discussed the Name of God, the Attributes of God, and the Trinity, Pope now sets aside several pages (beginning at page 276 of the second volume) to take these doctrines up again. Why? Because

in the finished work of Christ, the Name, Attributes and Government of God are most fully exhibited and glorified. The triune Name is made known; the Love and Righteousness of God have their highest and best manifestation, as the expression of the Divine will, and the Moral Government of the Supreme is supremely vindicated.

In his characteristic style, Pope summarizes vast stretches of biblical teaching with a suggestive quotation from Scripture: “The Son, addressing the Father a prayer which regards the Atonement as accomplished, declares: I have manifested Thy name unto the men which Thou gavest me out of the world” (John 17:6). Pope unpacks this “manifestation of God’s name” as the revelation of the name “Father” which was brought to us by the Son and completed in the Spirit. He goes on to explain the principle of revelation behind this:

The doctrine of the Trinity, in Pope’s presentation of it, is not a bit of esoteric information about God, but a fact made known when God put salvation into effect: when the Son and Spirit entered human history decisively, the Trinity was revealed. “Our Lord pronounced The Name of the Father, and of the Son, and of the Holy Ghost only after His resurrection. The mystery of His perfect love unfolded the mystery of His perfect essence.”

Although the glorification of the eternal Trinity is the main point Pope wants to make, he goes on to ponder the way the finished atonement glorifies God’s name in other ways: “that Name is not only the Triune Name, but the assemblage of the Divine perfections.” Again Pope is torn in two directions: On the one hand, he has already discussed the Divine perfections in the doctrine of God in volume 1, but on the other hand he cannot bypass their revelation in the finished work of the atonement:

In the New Testament it is obvious that with scarcely an exception every reference to the combined or individual perfections of God refers to their exhibition in the work of Christ. At least, all other allusions lead up to this. Not to repeat what has already been made prominent under the Divine Attributes, it may suffice to mention the new and perfect revelation of the holiness and love of God as disclosed in the Atonement.

What Pope is up to here is undercutting the inadequate notion that Christian theology can start by defining the characters of its story (“in this corner, God; in that corner, man”) and then go on to describe the actions they undertake. In the case of God, the only way Christian theology can get started is to admit that God has most definitively revealed himself in Christ the redeemer, so we have to describe the saving work of Christ as the beginning of our theology. If the doctrine of God started on page one, the doctrine of redemption had to have been on page zero, or maybe back in the pages i through cxix of a long and all-determining preface.

In other words, by treating the Name, Triunity, and Attributes of God in the middle of volume two, Pope underlines the fact that Christian thought has been presupposing the finished atonement all along. Volume one page one was already normed and formed by the work of Christ:

There is nothing that belongs to our conception of the Divine nature which is not manifested in His Son, Who both in His active and in His passive righteousness reveals all that is in the Father. Man, in fact, knows God only as a God of redemption; nor will He ever by man be otherwise known. Throughout the Scriptures of truth we have a gradual revelation of the Divine Being which is not finished until it is finished in Christ; God also, as well as man, is en auto pepleromenos, COMPLETE IN HIM. It is not enough to say that the Trinity Whom Christians adore is made known in Jesus, and that this or the other attribute which theology ascribes to Him is illustrated in His work. God Himself, with every idea we form of His nature, is given to us by the revelation of Christ. The gracious and awful Being Who is presented in the Christian Scriptures is not in all respects such a Deity as human reason would devise or tolerate when presented. But to us there is but ONE GOD; and we must receive Him as He is made known to us through the mystery of the Atoning Mediation of His Son. His Name is proclaimed only in the Cross; there we have His Divine and only Benediction; and every Doxology in Revelation derives its strength and fervour from the Atonement.