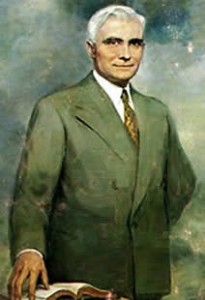 Today (April 25) is the day when Charles E. Fuller was born in 1887. Fuller is famous for the classic radio show The Old Fashioned Revival Hour, and for founding Fuller Theological Seminary. Charles Fuller started broadcasting in 1925, and the Revival Hour started in 1937, but it already sounded intentionally old-fashioned then. And Fuller Seminary started up in 1947, but somehow maintains an image too self-consciously contemporary to have had a mid-century origin. As a result, Charles Fuller’s 81-year lifespan (1887-1968) sometimes makes him look like a colossus bestriding two complete centuries of American evangelical life.

Charles E. Fuller was born in Los Angeles, and shaped by the unique cultural forces of southern California in its early boom days.  What many people overlook, though, is how closely Charles Fuller was linked with Biola. He was converted at Biola’s Church of the Open Door in 1916, graduated from the Bible Institute in 1921, served as a Field Representative for the school in 1926, and rescued Biola from near doom by taking over as president of the board of directors in 1928.  Fuller continued to collaborate closely with Biola for another decade after that, and his radio offices were located on the eighth floor of Biola’s main building at 6th and Hope Street in downtown Los Angeles well into the 1930s. His great successes with the Revival Hour and the seminary finally launched Fuller out of Biola’s orbit, but the man and his ministries make no sense without the Biola imprint.

Fuller’s conversion happened when he came to the Church of the Open Door, an interdenominational church founded by R. A. Torrey as part of Biola’s downtown mission. The preacher who Fuller came to hear that day, however, was not Torrey but Paul Rader, a former boxer who was preaching a sermon entitled “Out of the Cave.” As Fuller’s biographer (his son Daniel Fuller) summarizes the message, Rader argued that

apart from the Holy Spirit’s illumination, people were in a cave, as it were, blinded and unaware of the glorious and marvelous things  God had in store for them. They needed to ‘come out of the cave’ and realize the blessings God had promised to impart. As Charles Fuller listened to this message, the Holy Spirit convicted him that he was not living as one who looked forward to such blessings.

Fuller spent a few more years making a living in the orange business, and began teaching a Bible class. He and his wife Grace drove into Los Angeles to hear Torrey’s preaching at the Church of the Open Door whenever they could. Finally in 1919, he was able to enroll full time at Biola. Again, from Daniel Fuller’s Biography Give the Winds a Mighty Voice:

By becoming a student there, he exposed himself fully to the mood characterizing all that was best in the Bible Institute and Fundamentalist movement. To understand Charles Fuller and his ministry, it is necessary to understand a little of the Bible institute movement as it expressed itself in the lives of the three founders of Biola -Lyman Stewart, Thomas Horton, and Reuben Torrey. (p. 38)

While Fuller was exposed to all the founding members of the Bible Institute, by his own testimony “the teachers who influenced him the most at Biola were Reuben Torrey, William Evans, and Mrs. Anna Dennis.” Their stamp can be seen on all his later teaching. In fact, Fuller studied R.A. Torrey’s works so thoroughly that many of Fuller’s radio broadcasts are pretty much sections of R.A. Torrey’s doctrinal outline, What the Bible Teaches, with Fuller’s personal anecdotes interspersed throughout them. (For a great study of Fuller’s early preaching and its relation to Torrey and Biola, see Philip Goff, “Fighting Like the Devil in the City of Angels: The Rise of Fundamentalist Charles E. Fuller,” in Metropolis Rising: Los Angeles in the 1920s (Berkeley, CA: U.C. Press, 2001), pp. 220-251.)

And ten years later, when Biola’s reputation was threatened, it was Fuller who stepped in and helped reassure the constituency that Biola still stood for the ideals of the founders. The crisis had been touched off by an irresponsible dean who wrote a bafflingly bad book, and the over-reaction of suspicious fundamentalists who assumed the worst. Fuller handled the situation as well as could be imagined, attempting fairness all around but keeping his eye especially on that connection with the Torrey-Stewart-Horton generation that had handed Biola on to Fuller’s generation.

Charles Fuller was complex and creative, and the Biola connection doesn’t account for everything he accomplished. Fuller was also networking with Pentecostals in that early period, had struggles with his denominational setting, and was actively hammering out a brand new form of Christian preaching via popular radio. But Biola didn’t just touch his life at one or two points: Charles E. Fuller was a product of Biola, and his successes are, in part, an extension of the vision and work of Biola’s founders.