Last week I got to speak in Biola chapel, as part of a faculty series on the first chapter of John’s gospel. It’s a thirty-minute sermon, and you can view it at Biola’s video chapel archive. It’s always a blast to speak to the Biola community,and this series on John is very well designed, with a bunch of us coming at the chapter from various disciplines.

I pull some “public-speaker-in-a-gymnasium” antics for the first few minutes, and then get into the big, trinitarian idea of this amazing passage. Here is a rough transcript of the first major point.

Think about this: Say you’re an apostle or one of their disciples, and your job is to write a gospel. What are the rules for how you start a gospel? Well, there are only four real gospels, let’s check them out real quick.

Mark begins this way: “The beginning of the gospel of Jesus Christ.” Well, that’s easy, very straightforward. Oh, it goes on, “The beginning of the gospel of Jesus Christ, the son of God, as it was written in Isaiah the prophet, ‘Behold I send my messenger… prepare the way of the Lord.” With some prophecy. Nice. It gets you back into the kings of Israel, back before the Babylonian captivity. So God didn’t just think up this gospel thing, he’s been talking about it since Isaiah. And then John the Baptist says “I baptized you with water, but He will baptize you with the Holy Spirit.” So when Jesus shows up, we know what to expect. Nice work, Mark. 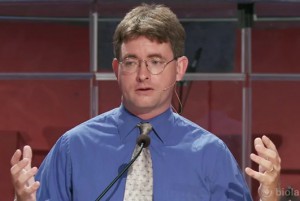 Now Matthew does all of that, too, but he has a different plan for an introduction. He wants to go even further back, to make sure you’ve got enough context, so he says, “the book of the genealogy of Jesus Christ, the Son of David, the Son of Abraham.” See that, he’s reaching further back than Isaiah, going back through David to Abraham. Nice work, Matthew. Way to start a gospel.

Luke comes in like a reporter, and says, “Inasmuch as many have undertaken to compile a narrative of the things that have been accomplished among us… it seemed good to me also… to write an orderly account for you, most excellent Theophilus, that you may have certainty concerning the things you have been taught.” And then he provides all kinds of backstory, two whole chapters about the events leading up to the birth of Jesus, and even a story about something Jesus did when he was twelve. Finally he gets to a genealogy, and decides to trace that family tree back through David and Abraham to Adam.

Well, here comes John, and he beats it. John is not messing around. His opening move: “IN THE BEGINNING.” That’s older than Adam, isn’t it? It’s almost like he’s saying “That’s the trump card, no more gospels.” Four is quite enough, and besides, there’s really nowhere to go from here, now. What are you going to do, say ‘before the beginning?’ Copycat.

It’s like when kids are fighting back and forth with a “times two,” “oh yeah, times four,” “oh yeah,” and then one of them the Infinity Card. “Oh yeah, times INFINITY.” Once the infinity card is exposed, the game is kind of over.

Now of course another famous book begins with the words “In the Beginning,” and that is Genesis. To start another book with “In the Beginning” is to say we’ve got to start over. That is, it reboots the Bible.

You’ve got to understand when you read the Jesus story, Jesus isn’t God’s next big idea. He’s God’s first big idea. He’s not the next word in a series of messages that God has been sending; he is the first word. Or, if you look at Genesis and say, “My Bible says that God’s first word was Let. As in ‘Let there be light.’” But John’s telling you that what he learned from Jesus is that there was a word before that word. 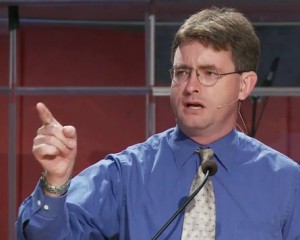 “In the beginning,” says Genesis, “God said Let there be light.” But John says, “In the beginning, before you hear that word, there was already this word. This word was already with God. And this word we’re talking about WAS God.” Jesus Christ isn’t the next word in a long conversation. He’s the first word, he’s the word above all words, he’s the word who God is. Part of the problem with going back to the beginning is, once you get there and go beyond it, there’s nowhere left to put anything except IN God. And that’s where John puts Jesus.

What breaks through in Christ is that which was from the beginning.

And why do the apostles do that? Because Jesus did it. Later in John’s gospel, in chapter 17, Jesus will say “before the foundation of the world” twice. He’s talking to his Father, and we get to overhear these words between Jesus the word and God the Father: “Father” he says, “glorify me in your own presence with the glory that I had with you before the world existed.” John 17:5. And in 17:24 he adds, “Father, I want those whom you have given me, to be with me where I am, to see my glory that you have given me because you loved me before the foundation of the world.” That’s the keynote, that’s the New Testament way of talking.

The coming of Christ, and the teaching of Christ, forced the thought of the apostles farther down, down deeper into the ultimate foundation of God’s ways and works. When Christ brought salvation, the apostles had to decide whether the life of Jesus Christ was one more event in the series of God’s actions, or whether, in meeting the Son of God, they had come into contact with something that was absolutely primal about God himself. Christ did not leave them the option of considering him just another prophet, or a servant of God in a series of servants. That’s why it was such a major decision for them to decide where they would start in telling the story of Jesus.

That’s why the introduction matters: It frames everything about the story.