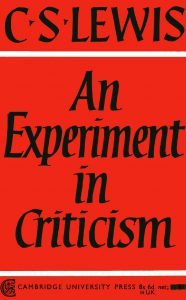 In his 1961 book An Experiment in Criticism, C.S. Lewis describes the difference between reading a book to encounter what is in it, and using a book for other reasons. There are lots of other reasons to use a book, some petty and some profound, but the point Lewis is making is that using is contrary to the kind of reading that he calls receiving.

Receiving a book has to do with experiencing, or re-experiencing, the structures and progressions of the text, mentally indwelling the significant form of what is said there, and being genuinely instructed by it. It may even involve grasping the unity of form and content so completely as to recognize that they must remain together, and recoiling from the “heresy of paraphrase.”

Lewis offers many illustrations of utilitarian reading, but my favorite is the way some people use books as excuses to say what they were going to say anyway. The spectacle he has in mind is when somebody reads a classic text and then makes remarks about it which seem true-to-life or (as they say) relatable, but did not arise from the text. “Many of the comments on life which people get out of Shakespeare,” Lewis says, “could have been reached by very moderate talents without his assistance.”

This sounds like it wold only be done by a pretty boorish reader, but Lewis rightly identifies how easy it is to fall into. There’s always the danger that we mentally catalog the books we’ve read with convenient labels that attach to reductive summaries, letting us know what to expect if we were to pick that book up again. If it’s a book we actually do re-read, the danger is that we’ll meet what we’ve taught ourselves to expect rather than what’s there:

We may go back to it chiefly to find further confirmation for our belief that it teaches this or that, rather than for a fresh immersion in what it is. We shall be like a man poking his fire, not to boil the kettle or warm the room, but in the hope of seeing in it the same pictures he saw yesterday. And since a text is ‘but a cheverel glove’¹ to a determined critic –since everything can be a symbol, or an irony, or an ambiguity– we shall easily find what we want. … We are so busy doing things with the work that we give it too little chance to work on us. Thus increasingly we meet only ourselves.

But one of the chief operations of art is to remove our gaze from that mirrored face, to deliver us from that solitude.

Reading receptively holds out the promise that you might learn something new, meet someone besides yourself, be worked on by a book. That’s an experiment worth trying.

¹A cheverel glove is made from very soft, thin kid leather; it is so flexible that it can easily be turned inside out. Lewis is quoting Shakespeare’s Twelfth Night.