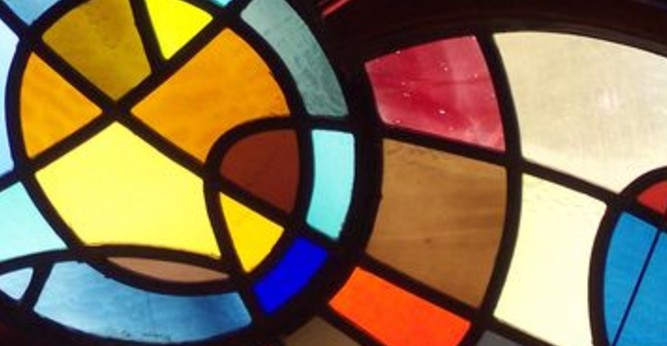 The Father sent the Son to save sinners. The main thing that should make us think of is, of course, the incarnation, in which the Son of God took human nature into personal union with himself and lived out divine sonship in the stuff of earth: as Jesus Christ, born of Mary, entangled in social and cultural relations, embedded in world history, audibly, visibly, tangibly. “That which was from the beginning, which we have heard, which we have seen with our eyes, which we have looked upon and have touched with our hands… was made manifest.” It was with the Father and was made manifest to us. And by “it,” I mean (as does 1 John) “he.”

Christian theology has to keep this visible and tangible manifestation of the Son central and prominent. It’s the fulcrum and hinge, the centerpoint of what Scripture tells us about the Father sending the Son. The prophets look forward to it and the apostles look back to it.

But there’s something else to be accounted for in Scripture’s witness, which is the eternal Son’s presence in salvation history beyond, or before, or beside, or behind the incarnation. You can probably tell I’m undecided about the right preposition to use. I’m stepping carefully. I want to say more than the incarnation, but I dread saying less. And I fear this may be one of those theological zones (like soteriology proper) in which addition turns out to be subtraction. I hereby promise to turn tail at the first sign of a Sola in this region. But encouraged by Augustine and Aquinas (De Trin 2-4; Summa Theol. I:43), I want to speak of the Son’s presence before and after the incarnation. Specifically, I want to speak of his mission; of the Father sending the Son. But not the incarnation. So what would that be?

The traditional thing to call it is the Son’s invisible mission. It’s a mode of divine presence described in Trinitarian terms, in which God is present in a new way to somebody in order to save and sanctify them. The key is that God is not generically present to them, but is present precisely as God the Son from God the Father.

To fill out the content of the invisible mission, we could start with a hypothesis that the Father always sends the Son to do the same thing, and then work with the fact that that Father-sending-Son thing is most clear and concrete in the incarnation. It’s most clear there because it talks (again, by it I mean he) and gives us purpose statements: “I have come in order to _____.” These statements are primarily about what he has come from the Father in order to do in the flesh during his earthly course. But they also shine as revelations of what the Father always sends the Son to do. When the Father sent the Son visibly and physically, the Son did the same thing he always does in his sending, but now he did it incarnate, decisively, as us and for us (in hypostatic union bi-directionally consubstantial).

Rather than distracting from the incarnation, approaching the Son’s mission from this angle is a good way of understanding the incarnation in fuller context. When we ask, “how is the visible sending different from the invisible missions?” we have plenty of Chalcedonian answers from the doctrine of the incarnation.

But what we gain from this conceptuality is a rich account drawn from the doctrine of the Trinity. In an invisible mission, what becomes newly present to believers is God (the one divinity) as well as filiality (the distinct person) in relation to paternity (the relation).

Sonship sent in Jesus Christ is sonship manifest; it has characteristics we meet in the gospels, and takes actions we read about there. It is present there not simply as an assertion of its own presence, but as something steadily against the background of its sender, to which it defers and refers. It teaches and speaks judgment; it expels the demonic and brings God’s own dominion; it is exalted on high and enthroned. It has both divinity and sonship in it, but as one they pursue companionship with humanity, taking responsibility for human burdens. It comes to expose and destroy the works of the devil. It shines with a glorious anointing. It spreads sonship to others in modes appropriate to them. It prepares for indwelling. It sanctifies.

You see what I’m doing here. I’m cheating by thinking of the gospels while talking about an invisible mission of the Son. Instead of talking about the persons in the gospel stories who meet Jesus, I am preparing to talk about persons in the Old Testament to whom the Son was sent, and persons today. I’m thinking about Matthew but talking about Genesis. Interpretively, therefore, it’s a form of allegorism: talking about something else. You’re probably familiar with some versions of it: How does Jesus still the storm on your sea, walk on the waves of your life, speak a word of power to your troubled soul? I wont’ be disappointed if the interpretive exercise I’m commending turns out to be pretty much what Grandma was always already doing in personal Bible study, or what Great-Grandpa preached –especially if somewhere among those ancestors I also find Athanasius and Cyril.

One danger to keep alert to is that of using a technique like this to turn the Jesus of the gospels into a cipher that symbolically represents some other thing, thus naming everything in any spiritual life “Jesus.” I think the current of referentiality runs rather the other direction, though: a theology of the invisible mission of the Son attempts to take the concrete particular Jesus of the gospels and stamp several other phenomena with his true likeness. I can imagine a theological reading of the life of Abraham that seeks to discern in God’s dealings with him something that must be true: that Abraham experiences sanctification because the Father sends the Son to him invisibly. That’s how sanctification works, and if we know in some detail what that looks like in Christ, we ought to be able to recognize it as it takes shape in Abraham, in David, and in the prophets. And as saints living after the incarnate ministry of the Son (that is, his visible sending), we ought to have even more categories for discerning the way the Father sends the Son to us to sanctify us.

A final note in a post that is really nothing but notes for further, more responsible work: I’ve avoided mentioning the Holy Spirit because I think the Son and Spirit, while they are distinct persons, are very difficult to distinguish in the invisible mission. My working assumption is that any person of the Trinity who eternally proceeds is also a person who can be sent, and will behave recognizably in the sending. But the Spirit’s visible mission is more complex than the Son’s. The Spirit makes himself visible through a dove, tongues of flame, and wind (if you call that visible); in none of these cases is there a hypostatic union between the Spirit and the signs. And the centerpoint of his salvation-historical presence (Pentecost) is so thoroughly connected with the Son’s that it gains concreteness from the incarnation, without itself being an incarnation. All of which is just to say that there is different work to do in speaking responsibly of the third person.