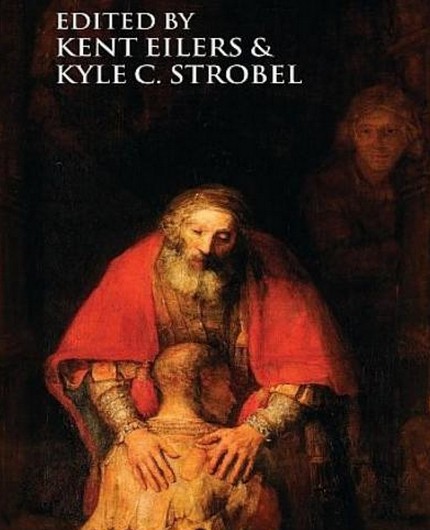 I was excited when Kyle Strobel and Kent Eilers invited me to write the Trinity chapter in their book Sanctified by Grace: A Theology of the Christian Life (Bloomsbury / T&T Clark, 2014), and I’m more excited now that the book is in print.  I described the whole book briefly in a recent post, and in this post I want to share a little of the chapter I wrote for the project.

The book begins with five chapters on the nature and the works of God, which is a revolutionary way to begin an account of the Christian life. The reader’s attention is immediately directed not to the ups and downs or ins and outs of spiritual experience, but to the God who is the source, means, and goal of the Christian life. These chapters amount to 60 pages out of about 250! So a chapter on the Trinity doesn’t exactly stick out, but is in good company with other chapters on God.

Still, I try to highlight how wonderfully odd it is to start a doctrine of the Christian life with sustained attention to the Trinity. Under a subhead that I hope was my own composition and not the editors’, the chapter addresses “the glorious irrelevance of the immanent Trinity.” There I argue that

A description of the triune God that intends to highlight how it is aligned with the doctrine of the Christian life must resist the distorting influence of rushing towards relevance. It must devote its attention to the revelation of God’s identity first, without asking in advance which elements of that description might later prove informative or helpful for the doctrine of the Christian life. Many recent theological projects have erred at this point, describing the immanent Trinity in a way that underwrites practical concerns and goals, attending selectively to only those elements of trinitarianism that are judged to be relevant for soteriology or spirituality…. In much modern theology, the doctrine of the Trinity has suffered from being too relevant, or too immediately relevant. (22)

But of course what I’m doing with those objections is clearing the ground for a proper approach to why the Trinity matters for the theology of the Christian life:

All the long lines of the life in Christ reach up towards the life of God in himself. All the trajectories of soteriology are launched toward something greater than soteriology. Indeed, without the doctrine of eternal generation, soteriology stops short of saying what it wants to be able to say. The task of soteriology is only half done when it describes what we are saved from, and even when it specifies the agent of salvation. Soteriology finds its real footing when it announces what end we are saved to; and that goal or direction of salvation has never been better stated than in the doctrine of trinitarian adoption. The character of the relationship that grace brings us into, at great cost to God the Father, is the filial character, the dependent relationship of a sonship which is not simply a created relationship but is our created participation in his uncreated filiality.

It’s a twelve-page chapter, so I’m sure you can imagine I have more to say about all of that. But I was delighted to see that the editors wrote a substantive summary of the chapter in their introduction. Here is how they put it:

Chapter 1, ‘The triune God’, situates the doctrine of the Christian life against the backdrop of God’s own life. More specifically, it shows how theological reflection on the eternal generation of the Son and the spiration of the Spirit illuminates the origins from which God’s saving action arises and the destination towards which redeemed human existence is set. Far from a conceptual abstraction, the doctrine of trinitarian processions gives the Christian life its ‘distinctive character’ as trinitarian adoption. Indeed, it is into this gloriously complete life between the Father, Son and Spirit that the Christian is adopted. Regarding the Son, his eternal begetting from the Father stands behind his temporal sending to save, and his eternal filial relation to the Father is the life secured by our union with Christ. Likewise, regarding the Spirit, the eternal breathing forth of the Spirit (spiration) stands behind his application of Christ’s finished work. That is, when the Spirit takes residence in the hearts of believers ‘his eternal relationship with the Father and the Son begins to take place among us’. Indeed, through the enlightening and enlivening movement o the Spirit, Christians receive the Sonship of the Son (Rom. 8:15; Gal. 4:6).

I couldn’t have said it –and didn’t say it– better myself, and I’m grateful to Kent and Kyle for seeing so clearly how the pieces fit together. Really, the whole volume is a marvel of editorial acumen, bringing together a set of very different theologians and letting them be themselves, but ending up with a book that works together so forcefully toward a common end.