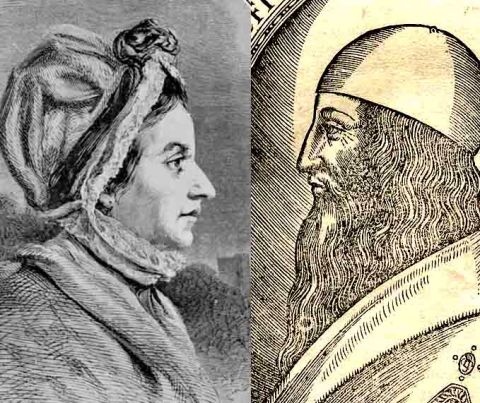 Susanna Wesley’s (1669-1742) claim to fame is that her boys John and Charles grew up to lead a world-changing international revival movement. Her complete works have been published in a single volume. She was a full-time home-schooling mom, and didn’t write very much by scholarly standards. But what she put on paper is ample evidence that she had a lively intellect and a mind for what matters.

The most striking instance is a note she jotted down about Aristotle in her devotional journal. The note is undated, but the editor of her published works estimates it was written around 1710, when little John (“Jackie”) Wesley was scampering around the house as a seven year old. In this note, Susanna is vexed by Aristotle’s teaching that the world is necessarily eternal:

Aristotle supposes the world to have been eternal, that is, streamed by connatural result and emanation from God, as the light from the sun, and that there was no instant of duration assignable of God’s existence in which the world didn’t also actually coexist.

This Aristotelian opinion is one that also vexed Thomas Aquinas, who wrote at length and with characteristic subtlety about it. Susanna Wesley lacked the time and the advanced philosophical training for that kind of length and subtlety, but with her own characteristic deftness, she jumped into the argument.

This error seems grounded on a true notion of the eternal infinite goodness of God, which he truly supposes must eternally be communicating good to something or other, and it was his want of the knowledge of revealed religion that probably led him into it.

Aristotle, other words, was half right. It’s true that God is infinitely good, and that his goodness is of a kind to be giving itself away to others. But that doesn’t mean that God always needed to have a world around to give his goodness to. Aristotle’s problem, Susanna argued, was that he had never heard of the Trinity.

For had he ever heard of that great article of our Christian faith concerning the Holy Trinity, he had then perceived the almighty Goodness eternally communicating being and all the fullness of the Godhead to the divine Logos, his uncreated Word, between whose existence and that of the Father there is not one moment assignable. As likewise the eternal Spirit, streaming from the Father and Son by connatural result and emanation as light from the sun…

The little old world doesn’t have to bear the burden of being God’s eternal recipient of self-giving goodness. The eternal Son has eternally existed alongside the Father, receiving eternally and fully the goodness of God the Father. Had Aristotle known this, he could have kept his correct notion of God as self-giving goodness, without being forced into the error of thinking the world was God’s eternal partner.

The argument could be extended and elaborated, but I’m convinced it’s right. How did Susanna Wesley get in a position to out-think the great Aristotle? She was wiser than all her teachers because the word of God was her meditation. When faced with a problem in philosophical cosmology, she knew that the doctrine of the Trinity had intellectual resources that could help solve the problem. She had already learned this while pondering the freedom of God’s love:

Consider the infinite boundless goodness of the ever blessed Trinity, adore the stupendous mystery of divine love! That God the Father, Son and Holy Ghost should all concur in the work of man’s redemption! What but pure goodness could move or excite God, who is perfect essential blessedness! That cannot possibly receive any accession of perfection or happiness from his creatures. What, I say, but love, but goodness, but infinite incomprehensible love and goodness could move him to provide such a remedy for the fatal lapse of his sinful unworthy creatures? (Works p. 225)

Her starting point was a joyful certainty that God was not needy, but absolutely self-sufficing. He created the world not because he needed an outlet for his love, and certainly not because his blessedness was cramped and needed more objects in order to increase:

Then consider what that blessed Being is to us –A creator, he made us of nothing; we are the effect of infinite power, wisdom and goodness! He had no need of us, being perfectly happy in the contemplation of his own perfections; therefore not to increase but communicate his happiness and glory did he give us being. (Works p. 304, dated 1709)

The doctrine of the Trinity is a complex matter, and a variety of things might come to mind when you think of the doctrine. Most Christians, sadly, immediately think of the tension between the three and the one, and start casting about for analogies for it. For Susanna Wesley, apparently the first thought that leaped to mind when the subject of the Trinity came up was, instead, the absolute self-sufficiency of God as a triune fellowship of love. Closely linked to that divine aseity, however, was the unexacted, unaccountable freedom of his generosity in creating and redeeming us.

We know there is but one living and true God, though revealed to us under three characters –that of Father, Son, and Holy Spirit. In God the Father we live, move, and have our natural being; in God the Son, as Redeemer of mankind, we have our spiritual being since the fall; and by the operation of his Holy Spirit the work of grace is begun and carried on in the soul; and there is no other name given under heaven by which men can be saved, but that of the Lord Jesus.

And here, madam, let me beseech you to join with me in admiring and adoring the infinite and incomprehensible love of God to fallen man, which he hath been pleased to manifest to us in the redemption of the world by our Lord Jesus Christ. He is the great God, “the God of the spirits of all flesh,” “the high and lofty One that inhabiteth eternity,” and created not angels and men because he wanted them, for he is being itself, and as such must necessarily be infinitely happy in the glorious perfections of his nature from everlasting to everlasting; and as he did not create, so neither did he redeem because he needed us; but he loved us because he loved us, he would have mercy because he would have mercy, he would show compassion because he would show compassion.” (Letter to Mrs. Alice Peard, Works p. 173, dated 1737)

“He loved us because he loved us.” This is Susanna Wesley’s first thought when she thought of the Trinity. It was a devotional thought, a doctrinal foundation, and the insight she needed to get a right answer where even the mighty Aristotle had gone wrong.