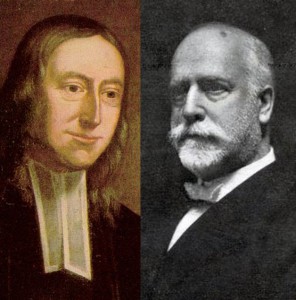 There are many lines of connection between John Wesley (1703-1791) and R. A. Torrey (1856-1928), but when I was asked recently to speak to an evangelism class about lessons from these two great evangelists, I knew immediately what they had in common. They both understood that the most important thing an evangelist can do is let God speak. And they both knew that the best way to do that was to put the words of Scripture directly into the minds of their hearers.

In their evangelism, Wesley and Torrey marshaled all kinds of arguments and used all sorts of illustrations. But in both cases, the main thing they did was to use the very words of Scripture over and over, so that lurking within their own human sentences were divine sentences, and through their appeals to their contemporaries, the voice of God was sounding forth.

The only power that can bring a person to spiritual life is the word of God: We are “born again … through the living and abiding word of God” (1 Peter 1:23). The words of the human evangelist can’t accomplish this divine end. God must speak, and we know that he has spoken in the words of Scripture.

There’s no magic involved here. It’s not that just quoting Bible verses makes people get saved. If that were the case, then loudspeakers would do the job, and the kind of evangelism that involves simply shouting Bible verses into a crowd would be the standard practice, rather than the drastic exception it is. Insensitive and robotic Bible-quoting is not sufficient. And on the other hand, the very words of Scripture are not mandatory: An evangelist is free to paraphrase the word of God, conveying its essential truth in different words.

But Wesley and Torrey shared a more direct approach: overwhelming quotation. These two evangelists, sensitive communicators that they were, just pummeled their audiences with sheer Bible.

Wesley’s way of doing it was to weave the words of Scripture into his own sentences. Instead of saying “we are all sinners” (four words), he would say “we have all fallen short of the glory of God, failing to love the Lord our God with our all, or our neighbors as ourselves, rather whoring after those which are not gods, and making for ourselves cisterns that cannot hold water.” He did this partly for the rhetorical power of the biblical phrases, but partly because he knew that if he said the very words of God, he could put his hearers in touch with the one who could save them.

John Wesley had a good literary ear, and when he wrote sermons, he could cram an astonishing amount of Bible into one of his paragraphs. His brother Charles had the same skill, and the typical Charles Wesley hymn somehow manages to put three Bible verses into every two hymn lines. John’s sermons have a similar density of Scriptural allusion and quotation. As Rob Wall has recently observed,

Wesley’s practice of stringing quotations of biblical texts together envisages an oracular manner of preaching. The Bible was Wesley’s ‘second language.’ Not only does his extensive quotation of Scripture envisage a deep reverence for the Bible’s sacred words, his firm confidence that those biblical words deliver the word of God without need of human mediation create a prophetic ‘thus saith the Lord’ address. Put differently, Wesley’s prolific use of Scripture turned his sermons into sacraments, means for the body of Christ to ingest the sacred words and to experience in them afresh the Holy Spirit’s active presence in our hearts.

R.A. Torrey applied the same principle, but with a different rhetorical twist. In his book How to Work for Christ, he explained the various kinds of people an evangelist was likely to encounter. For each kind, Torrey outlined the arguments and evidence that would be appropriate. When he came to a description of “those who have doubts,” he advised repeating the words of Jesus over and over. The whole thing just has to be read in Torrey’s distinctive style. He tells of a wreck of a man who was brought to him for counsel, and how their first interview went poorly. But they met again:

Days and weeks passed, and then one day I met him in the Institute, where he was stopping, in the hall-way on the second floor, and I thought the time had come to have it out. I said, “Sit down,” and he sat down beside me. I said, “Do you believe the Bible?” “Yes,” he said, “I do, everything in it” “Do you believe John 6:37?” He said, “Yes, and I can quote it: ‘Him that cometh to Me I will in no wise cast out.'” I said, “Do you believe that?” “Of course I do; I believe everything in the Bible.” “Why do you not come?”

He said, “I have been once enlightened, and have tasted the heavenly gift, and have fallen away, and it is impossible to renew me unto repentance.” I said, “It does not say, ‘If you have not been once enlightened, and tasted the heavenly gift, and fallen away, I will in no wise cast you out.’ It says, ‘Him that cometh unto Me I will in no wise cast out.'”

I said, “Has He received you?” He said, “I don’t feel it.” I said,, “I did not ask what you felt; what does Jesus say?” He said, “‘Him that cometh unto Me I will in no wise cast out.” “Did you come?” “I did.” “What has Jesus done?” “He has received me.” “Now,” I said, “go right to your room. The devil will give you an awful fight, I have no doubt. But you kneel right down with both knees on John 6:37, and fight the devil with it, and you believe what God says, no matter what the devil whispers.” He went to his room, and the devil gave him an awful time, but he kept both his knees on John 6:37, and came out with the light of Heaven on his face. He soon began to preach and teach the Bible, and is to-day one of the most useful men on earth.

God’s Word is pure, in spite of the devil, in spite of your fear, in spite of everything. And, standing on God’s Word, I proclaim to every man and woman in this room that if you come to Jesus Christ He will take you to-night. Will you come?

I know, and Torrey knew, that this repetitive approach sounds knuckle-headed. And of course it could be deployed with real insensitivity. But Torrey knew what he was about when he made sure to subordinate his own words to the word of God in evangelism.