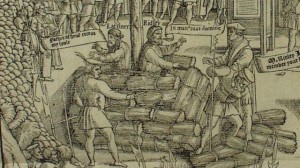 Today (October 16) is the day when Hugh Latimer (born 1487) and Nicholas Ridley (born around 1500) were burned at the stake in 1555. These Cambridge-trained men are called, with Cranmer, “The Oxford Martyrs,” because they were killed in Oxford under Queen Mary as she undertook to turn England back to Roman Catholicism.

The English Reformation was a world-historical mess, with plenty of killing on both sides. C.S. Lewis described it as “that whole tragic farce” in which serious theological issues unfortunately “attracted the fatal attention of both government and the mob.” He gives as good an account of the general atmosphere as I’ve read anywhere (this is from his big Oxford History of English Literature volume, p. 37):

It was as if men were set to conduct a metaphysical argument at a fair, in competition or (worse still) forced collaboration with the cheapjacks and the round-abouts, under the eyes of an armed and vigilant police force who frequently changed sides. Each party increasingly misunderstood the other and triumphed in refuting positions which their opponents did not hold.

There were plenty of political reasons why Ridley and Latimer had to go: Ridley had strongly supported Jane Grey to be the next queen, for example, and had declared Mary to be illegitimate. But they were put on trial for heresy, convicted of being Protestant, and sentenced to death by burning. Cranmer had been arrested in the same round-up, but his trial took much longer. He is said to have watched their execution from the tower, and he was killed on the same spot a few months later.

Latimer had been converted to evangelical faith under Thomas Bilney (1495-1531), whose Protestant teaching (sparked by reading Erasmus’ edition of the Greek New Testament) had so irritated him that he hounded Bilney through the halls of Cambridge with theological argument. But Bilney made an appointment to confess his sins to Latimer, and it was such a theologically penetrating confession of sins that Latimer, hearing the confession, embraced the doctrine of salvation by faith alone. Bilney was martyred for his evangelical convictions in 1531.

By the time they came to die, Latimer was about 68 years old and Ridley about 55. The two friends were tied to one stake and the fire was lit. Latimer died quickly, and his final words to his friend were “Be of good comfort, Mr. Ridley, and play the man! We shall this day light such a candle by God’s grace, in England, as I trust never shall be put out.”

Ridley needed the encouragement, for his dying that day was horribly slow. On the way to the stake he had prayed, “Oh, heavenly Father, I give unto thee most hearty thanks that thou hast called me to be a professor of thee, even unto death. I beseech thee, Lord God, have mercy on this realm of England, and deliver it from all her enemies.” But as the botched execution dragged on, he was reduced to crying out “Lord have mercy upon me! I cannot burn..Let the fire come unto me, I cannot burn.”

HOW fast the Marian death-list is unrolled!
See Latimer and Ridley in the might
Of Faith stand coupled for a common flight!
One (like those prophets whom God sent of old)
Transfigured, from this kindling hath foretold
A torch of inextinguishable light;
The Other gains a confidence as bold;
And thus they foil their enemy’s despite.
The penal instruments, the shows of crime,
Are glorified while this once-mitred pair
Of saintly Friends the murtherer’s chain partake,
Corded, and burning at the social stake:
Earth never witnessed object more sublime
In constancy, in fellowship more fair!