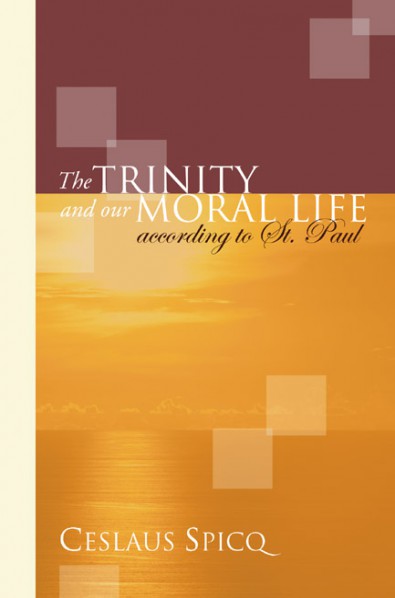 Chapter 5 of Ceslaus Spicq’s 1963 The Trinity and our Moral Life is entitled “The Beauty of the Moral Life,” and in ten little pages it draws together not only some of the key ideas of the book but some of Spicq’s deep immersion in the peculiar vocabulary of the pastoral epistles. I don’t think he was especially setting out to write an essay restricted to the pastorals; I suspect he was just so deep into a years-long thought project about them that their vocabulary came naturally to mind when he thought about this subject.

And that unique vocabulary of Titus and the Timothies is one of the most interesting features of the pastoral epistles. The standard statistical analysis is telling: with a total vocabulary of 848 words (not counting names), the pastorals use 306 words not found in the other ten Pauline epistles, and 175 not found elsewhere in the NT at all. Those oft-repeated stats may be a bit inflated (consult Marshall’s ICC volume, p. 60 for some deflation), but the Paul of the pastorals definitely uses a different set of key words than he’s used in previous letters (consult Towner’s NICNT volume, pp 83-88 for reasons to stick to Pauline authorship despite everything).

Having just surveyed the trinitarian shape of Pauline morality in the previous chapters, Spicq draws the conclusion that the cumulative effect must be striking to observers:

The fruits of this divine education can be nothing other than magnificently rich. When, in the evening of his life, St. Paul reflected upon Christian morality, whose main axes he had determined, he found it radiant with beauty. For him, to obey truth, to do good, to live in beauty were one and the same thing.

To this he appends his tendentious translation of Titus 3:8: “Those who have faith in God must be anxious to excel in beautiful works.” Beautiful works, perhaps over-translating kalon to make the point that these works are not merely agathon. Instead of defending his translation of a single word, though, Spicq provides a reading of the pastorals that is thoroughly infused with a sense of the Christian life as classically beautiful:

This conception of moral beauty is rich in meaning; it contains the qualities of nobility, integrity, and glory, of perfection and completion; it is opposed to ugliness which is a characteristic of vice; finally it implies excellence –the beautiful is the perfect good, uniting order, measure, and harmony. It is not only appealing and attractive, but it is preferred before all else, and it is praiseworthy because it is good.

The spiritual beauty that St. Paul asks of his disciples is the radiant splendor of grace, received from God and revealing itself in the most varied ways in concrete daily circumstances: ‘Christ redeemed us to have a people zealous for beautiful works.’ (Titus 2:14)

One of the oddities about the pastorals is that they are preoccupied with how Christians, and Christian leaders, appear to those outside the church. When describing the qualifications of elders, for example, Paul seems almost as concerned that they be of good reputation as he is concerned that they be good. Too much of that emphasis would tilt toward hypocrisy (“the main thing is sincerity: once you can fake that, you’ve got it made!”). But hypocrisy is unthinkable if the real concern is an outward shining of an inward virtue: “The harmony between the exterior conduct and the interior grace of Christians gives an esthetic quality to their morality; it has measure, order, balance, decency, and religious gravity.”

“Adorn the doctrine” Paul says in Titus 2:10, just as he had said in Ephesians “walk worthy of the calling.” Adorn the doctrine of salvation by grace alone through faith alone (“not because of righteous works that we have done, but because of his mercy”) with suitable good works, with beautiful works.

This is the gospel expressed not just with the change of a few words into a more hellenistic moral vocabulary, but in a way that actually lays hold of and commandeers what is best in that ancient pagan tradition. The unique vocabulary that Paul used in these letters to his deputies, the half-gentile Timothy and the fully-gentile Titus, is a bold missionary appropriation of Greek ethics.

But it remains a critical appropriation: the shining moral beauty of hellenistic ethics was generally too much an endorsement of the status quo for the healthy, wealthy, and respected. Here Paul trims the vocabulary to fit the gospel, rather than vice versa. In a final reflection, Spicq notices that the charge to “adorn the doctrine” is not given to rulers, to the wealthy, to the highly educated, but to slaves. “Such a beauty cannot but attract, and it is ageless. Today, as in the days of St. Paul, the Christian, no matter how humble or how obscure, is the child of God; he exists in Christ, and he possesses the strength of the Holy Spirit. ”