It’s not all Psalmtooning around the house these days. The artists known as Freddy Age Ten and Phoebe Age Eight are nothing if not prolific, and their work cannot be confined to any single medium or genre. The resident curators (also known as parents) are constantly finding art scattered around the studio/gallery area. Here are a couple of scraps from recent days.

Here’s something from the back of a book report on A Wrinkle In Time, the late Madeline L’Engle’s Newberry-winning classic. 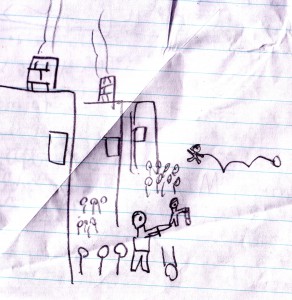 If you don’t know the story, you can still get a lot from this picture. Three identical houses receding into the distance, with identical flower gardens in front, and identical children bouncing standard-issue balls in rhythm. But that third house in the distance has a boy in front of it who can’t bounce the ball right, and in contrast to the up-down lines of the other balls, the arcing motion line follows the ball out into the street. Boing, boing, boing.

If, on the other hand, you do know the story of Wrinkle in Time, you can also appreciate the oddly modernist interpretation Freddy Age Ten has given to the housing units provided by IT for the residents of Camazotz –check out that window placement. This time through L’Engle, I was struck by how much her Big Message boils down to “don’t let the man hold you down, man,” and the distorting effect that has on the Christian elements in her fiction. But for the fifth graders, it’s a blast! The illustration was not part of the assignment. All we asked for was a book report, but we got a swell little graphic along with it, which sort of proves that the boy got the point of the book. “I would recommend this book to people who are interested in science fiction and the battle of good against evil,” concludes the book report.

And as Star The Droid Wars Wars fever spread through the household, infecting younger and younger residents, we find more and more images illustrating goings-on in a galaxy far, far away. For example, here is a very carefully rendered R2D2, left behind by Phoebe Age Eight: 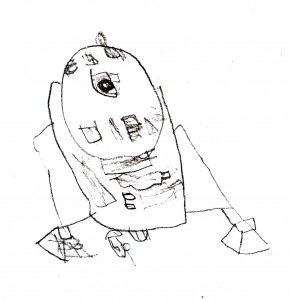 R2 seems to have gotten the message, too. He’s not exactly toeing the line or standing up straight. This little droid is animated by a spirit all his own, flexing and bending, leaning to the side. He’s not part of your system, man.