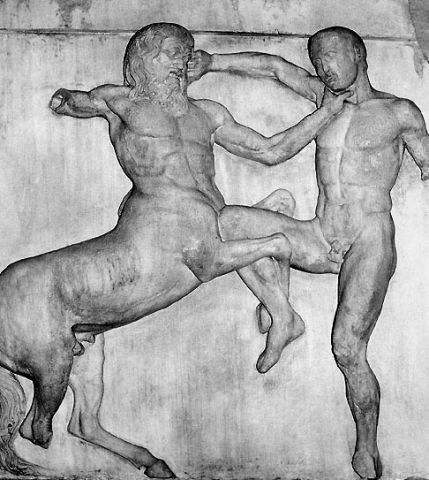 How did Aeschylus do it? His plays are so powerful and engaging that he will never lose his place in the front ranks of dramatists. We only have seven of his plays extant –a tenth of what he produced– but even if we had only one, we would recognize in it the hand of a master. When you stoop to examine his workmanship to see how he constructed these plays, you can hardly find the signs of his craft. The basic building blocks (the characters, the speeches, the images) are so obvious that each of them seems inevitable, yet you could never have guessed them in advance. And as Aeschylus stacks scene upon scene, line upon line, his work gathers power and the total effect is unsurpassed.

It will be seen at once, even through the smoky medium of a modern translation, that this is a poet of brilliant and yet simple strokes. His images are very simple, his observation is acute, and he tells us far more than he says. His language has a stately formality but it moves swiftly and vividly. This is cumulative poetry; it builds on itself as music does.â€ (Peter Levi, â€œGreek Drama,â€ in The Oxford History of the Classical World (ed. John Boardman, Jasper Griffin, Oswyn Murray) (Oxf 1986), p. 160)

The most uncanny thing about Aeschylus is, in Levi’s words, how “he tells us far more than he says.” How do some poets pull that off? And specifically, how did Aeschylus, this proud veteran of the Battle of Marathon, manage to move the biggest and simplest images around in front of us in a way that strikes the sensitive reader as revelatory? When Aeschylus writes, it is as if we get to see reality itself acting out its personality on stage, and we can watch how it limps and lisps and staggers. He obeys the canonical rule of good theater: show, don’t tell.

This artist wrote from a golden age of great art. The Athens of his time went on to bring forth a series of dramatists, architects, sculptors, historians, politicians, and philosophers who set the standard for Western achievement. In fact, I think that Aeschylus’ greatness cannot be explained without recognizing that he was in a culture that was evidently pregnant with artistic greatness. It doesn’t take away from Aeschylus’ personal accomplishment to note that he did his work in a culture that was capable of calling forth his powers and appreciating his art.

John H. Finley, in the Aeschylus section of his 1966 book Four Stages of Greek Thought , explains what was going on in Athenian culture at this time. I found Finley’s remarks enlightening for thinking about any great artistic age:

Now of the many ways of trying to understand a great artistic age, one way is to conceive it as a transient moment when people still see the world primarily through the play and color of action and the senses, not through ideas, yet also as a time when ideas are rising toward the surface, almost but not quite breaking the old reliance on impression. An outlook that speaks chiefly through poetry, drama, and the arts rather than through philosophy and science obviously finds action and impression the main reality. Everything that it reports comes back to what a person observes and feels; otherwise why put on the stage Agamemnon or Oedipus, Hamlet or Lear, declaring in their own words the hard-won response that events wring from them? (p. 31)

How could Aeschylus tell more than he said? He was in command of a language of image and impression which he could use directly on the audience’s sensibilities, rather than needing to translate it into concept and word first. So much art goes bad at precisely this transition: the artist experiences something which gives him an impression of truth, which he then distills into ideas and describes to himself. He then takes the abstract idea and expresses it again in symbolic form, delivering that to an audience. The kind of age that produces a wealth of great art, on the other hand, is one in which the artist is able to work directly with the impressions, to produce a polished work of art without the conceptual translation that so often drains the life from it. Finley again:

Thus a great artistic age is one that lives with the color of the world as people directly feel it; it does not brush aside the show and impression of things in favor of ideas and definitions that are felt to express reality more purely. This is not of course to say that the poetic mind does not think, only that its ideas are not distilled and separated off from emotion and the senses, as if these impeded thought; rather, it works and moves as the consciousness itself seems to do, simultaneously entertaining ideas, sensuous impressions, moral tones, feelings of attraction or dislike, all inextricably bound together and speaking as one. Of all forms of knowledge, literature most closely transcribes the consciousness because it works in this undivided way and does not, like mathematics or a science, buy its gains by isolating that part of the consciousness that deals with recurrences and logical sequences. It approaches things as the eyes and ears â€“even, to some degree, the other sensesâ€”together with mind, emotion, and memory approach them, all functioning together. Literature in so doing obviously puts trust in individual experience, as if each personâ€™s main function were to respond to life as fully as possible and to learn its teachings by all the means at his command. This brings us back to the character of a great age: it is a time when meanings seem within peopleâ€™s reach. The Athenians who thronged the south slope of the Acropolis to watch a play of Aeschylus, like the Londoners who crowded the pit of the Globe Theatre, clearly did not think that knowledge lay hidden in some esoteric school, to be reached by analysis. Rather, it lay open to the senses and thoughts of daily consciousness; its language was only the fullest use of the common tongue. A great age is a moment of faith and sharing, before the complexities of nature and society separate man from man in a pursuit of special powers that destroys the former faith in the full consciousness. (page 33)

Finley argues that Aeschylus was a spokesman for an age in which the wave of myth and image was just cresting. It was about to splash over into the epoch of astonishing philosophical clarity associated with Socrates and his students. “Part of the grip on the imagination that fifth-century Athens never ceases to hold is that these two kinds of worlds met then, the former culminating as the latter came into being. Aeschylus and Sophocles spoke for the older outlook that saw things through shape; Socrates and Thucydides for the nascent mind that saw them through idea.” (p. 35)

I don’t intend for these remarks to be Delphic, and I don’t think artists should try to decide in advance whether they are living in an era which is capable of recognizing itself in the forms and images available to its artists. Anybody trying to make worthwhile art today is likely to feel discouraged at their prospects in an age that cannot name itself, with an unprecedented appetite for entertainment and a debased coinage of meaning. The Athens of Aeschylus must have felt like more of an accomplishment, and the sensitive among its citizens must have been conscious of the abyss of chaos that threatened them –certainly Aeschylus was.

You don’t get to pick the age you’re born into, and you shouldn’t gamble too much on your ability to evaluate its possibilities. All an artist can do is keep seeking the truth, and try to describe it as it makes itself apparent, in whatever medium you’re skilled at expressing form in. There’s no way to escape the fact that you’re a part of the world and culture that you occupy. The artist is an art-making part of that world. Every move he makes might be free, but all the possibilities are shaped by the world around him.

Rainer Maria Rilke, in the poem quoted on the title page of Hans-Georg Gadamer’s Truth and Method, said this:

Catch only what you’ve thrown yourself,all is
mere skill and little gain;
but when you’re suddenly the catcher of a ball
thrown by an eternal parter
with accurate and measured swing
towards you,to your centre,in an arch
from the great bridgebuilding of God:
why catching then becomes a power —
not yours, a world’s.