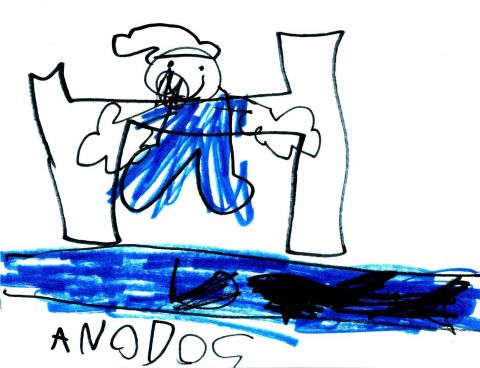 Freddy Age Six provides an illustration for George MacDonald’s Phantastes, the truly bizarre Faerie Romance of 1858. The main character, improbably named Anodos, leaps smiling from his bed to find the floor of his room divided by a creek, complete with fish swimming in it. All of that creek-in-the-bedroom stuff is in the book, except that the fish in Freddy’s drawing is a shark, and that Anodos, in Freddy’s illustration, is transparent. The transparency of Anodos may be a shrewd interpretive move on Freddy’s part. It’s not that Anodos, or Phantastes, is easy to see through to the meaning of. Far from it. But you can see things through Anodos.

Phantastes is the book which C. S. Lewis read as a young man, and later confessed “that night my imagination was, in a sense, baptised; the rest of me, not unnaturally, took longer. I had not the faintest notion what I had let myself in for by buying Phantastes” (Surprised by Joy, p. 146).

Like many other young evangelicals, when I read Lewis’ endorsement of MacDonald’s book, I ran right out and got myself a copy of this imagination-baptizing faerie romance. And like many other young evangelicals, I laid the book down wondering, “what the heck was that?” There are pages and pages of numinous beauty here, but nothing that I can confidently call a plot, a narrative structure, or a developed theme. There are apparently rules that are supposed to be followed (“trust this tree, but not that one”), but they are magical rules like something from a Hayao Miyazaki film. Anodos does something bad (character flaw!) and picks up a shadow (plot complication!), which causes him trouble and sets him on a quest (ooh, a quest! how like a plot!) to get rid of that shadow. 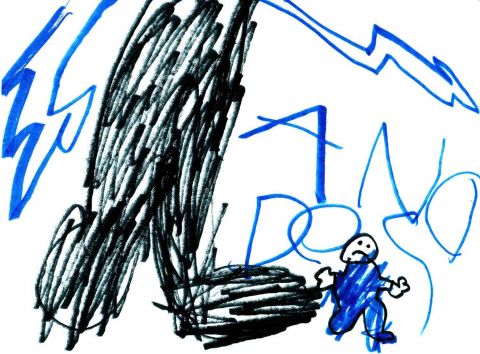 And a careful reader may track some growth of character for our hero Anodos, but most of it happens after he dies and comes back as a tree.

In MacDonald’s essay “The Fantastic Imagination,” he explains what a reader of fairy tales should look for, and should NOT look for, in works of this nature.

You write as if a fairytale were a thing of importance: must it have meaning?”

It cannot help having some meaning; if it have proportion and harmony it has vitality, and vitality is truth. The beauty may be plainer in it than the truth, but without the truth the beauty could not be, and the fairytale would give no delight. Everyone, however, who feels the story, will read its meaning after his own nature and development: one man will read one meaning in it, another will read another.

“If so, how am I to assure myself that I am not reading my own meaning into it, but yours out of it?”

Why should you be so assured? It may be better that you should read your meaning into it. That may be a higher operation of your intellect than the mere reading of mine out of it: your meaning may be superior to mine.

“Suppose my child ask me what the fairytale means, what am I to say?”

If you do not know what it means, what is easier than to say so? If you do see a meaning in it, there it is for you to give him. A genuine work of art must mean many things; the truer its art, the more things it will mean. If my drawing, on the other hand, is so far from being a work of art that it needs THIS IS A HORSE written under it, what can it matter that neither you nor your child should know what it means? It is there not so much to convey a meaning as to wake a meaning. If it does not even wake an interest, throw it aside. A meaning may be there, but it is not for you. If, again, you do not know a horse when you see it, the name written under it will not serve you much. At all events, the business of the painter is not to teach zoology.