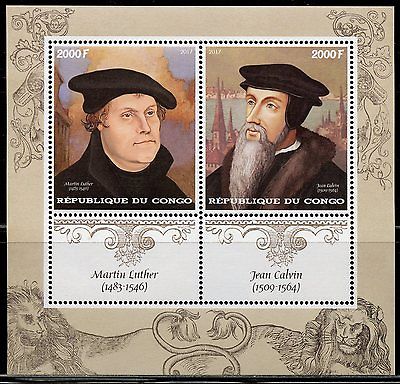 October 2017 marks the 500th anniversary of the Reformation’s symbolic beginning: Luther’s posting of his 95 theses on the door of the Wittenberg castle church.

To celebrate, three Torrey theologians are co-teaching an upper-division elective seminar on the Reformation. Matt Jenson, Greg Peters and I have gathered a group of students and we will spend the semester reading Reformation theology.

Torrey Honors is a great books program, so our angle of approach will be through select masterworks of the movement. Cutting that down even further, we decided to limit ourselves to favorite texts from two standout Reformers who excelled above all in the area of writing: Luther and Calvin. But in order to keep their Protestant doctrine (yay!) from becoming merely a matter of brittle and abstract head knowledge (boo!), we wanted to make sure our readings made explicit connections to two other things: their biblical exegesis and their spirituality.

What are we reading? Hey, if that’s your question, you’re our kind of people. Here’s the reading list.

Week 1: Luther: The Freedom of the Christian (printed in Basic Theological Writings), the incisive 1520 tract that explains the difference forgiveness makes for everything. For background to the first half of the course, we also read Heiko Oberman’s wonderful biography Luther: Man Between God & the Devil.

Week 2 Luther: The Large Catechism. The catechism includes the Creed, the Ten Commandments, and the Lord’s Prayer, so here in short and teachable form is Reformation ethics, doctrine, and spirituality.

Week 3 Luther: Babylonian Captivity of the Church. Another tract from 1520, more programmatic in scope. We are excited to be trying out the new Fortress Press annotated edition.

Week 4: Calvin & Luther on Psalm 102. The classic way to do theology, badly neglected in our time, is to gather around Scripture with the theologians of the past. This session is about the 102nd Psalm, a lament (“Hear my prayer, Lord”), which we get to study with the Reformers.

Week 5: Luther: Lectures on the Song of Solomon. Greg Peters, who knows a lot about monastic interpretations of the Song, takes the lead on Luther’s rather peculiar reading of it. Clue: Luther reads it as a political treatise! And “he’s not wrong,” as the kids say.

Week 6: Calvin & Luther on Genesis 1. Matt Jenson leads a session on what the Reformers say about the opening words of the Old Testament. Jenson, by the way, reached out to several friends at other schools for advice in shaping this whole course. The Genesis and Psalms readings were recommended by Todd Billings.

Week 7 Luther: Last Words of David (2 Sam 23). Fred Sanders picked this reading because it’s Luther’s guidelines for Trinitarian interpretation of the Old Testament. Prosoponic exegesis: so hot right now. Luther’s all over it.

Week 8: Calvin and Sadoleto: A Reformation Debate. The devout and learned Roman Catholic Cardinal Sadoleto wrote to the people of Geneva, summoning them home to Rome and laying out his reasons. Calvin acknowledged the learning and piety of the Cardinal, and politely explained why the invitation could not be accepted. This is a wonderfully clarifying exchange, and a chance to hear both sides in primary text. Also, as background for the second half of the course, we read Bruce Gordon’s fine biography Calvin.

Week 9 falls on Reformation Day itself. So we’ve asked each student to write up 20 theses for disputation. We will nail them to a door and talk it out. We hope for a lively and informed session on church reform and the circumstances of division.

Weeks 10-13: It’s an Institutes of the Christian Religion course from here on in, folks (McNeill/Battles edition). But to get at the spirituality of the Reformation, we’re focusing on Book III, “the way in which we receive the grace of Christ.” Week 10 (pages 537-684) is on faith and repentance; week 11 (pages 684-849) is on the Christian life and justification; and week 12 (pages 850-920) is on prayer. Finally we conclude with the section of book IV that lays out Calvin’s positive viwe of sacraments(pp. 1276-1359).

That’s our class; at least the heart of it, the reading list. There are some writing assignments as well: each student will write a brief statement expounding on each of the five reformation solas (faith, Christ, scripture, grace, and the glory of God), and each student will write a 1,000-word closing statement on the questions, “What does it mean to be Protestant? and What is the future of Protestantism?”

There are other ways to mark the 500th anniversary of the Reformation, and more active ways to be faithful to the great Protestant heritage. But we’re bookish here. So here we sit, reading. We can do no other.