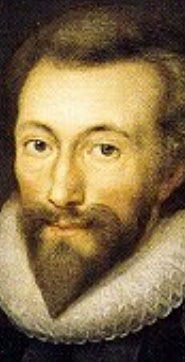 Today in 1572, John Donne was born. Donne was equally powerful as a poet and as a preacher, because in both roles he exercised an apparently absolute mastery over the English language.

In his 1999 book The Theology of John Donne, Jeffrey Johnson argues that “the doctrine of the Trinity is for Donne the seminal Christian belief,” and provides ample textual evidence that Donne was committed to preaching and teaching on this doctrine.

In an important sermon preached in the royal court in 1629, Donne lamented how neglected the doctrine of the Trinity was:

But though in our Doctrine we keep up the Trinity aright; yet God knowes, in our Practise we doe not. I hope it cannot be said of any of us that he beleeves not the Trinity, but who amongst us thinkes of the Trinity, considers the Trinity? Father and Sonne doe naturally imply, and induce one another; and therefore they fall oftner into our consideration. But for the Holy Ghost, who feels him, when he feels him? Who takes knowledge of his working when he works?

For his part, Donne wanted to bind the name of the Trinity to his parishioners and his nation. Quoting the church father Basil of Caesarea, Donne argues that “it is the foundation, the summe, it is all the Christian Religion, to beleeve aright of the Trinity.” And quoting Augustine of Hippo, Donne agrees that the doctrine is a very difficult one, but one that repays close study: “As there is not so steepy a place to clamber up, nor so slippery a place to fall upon, as the doctrine of the Trinity; so is that also true… there is no so fulfilling, so accomplishing, so abundant an Article as that of the Trinity, for it is all Christianity. And therefore let us keepe our selves to that way, of the manifestation of the Trinity.”

Donne’s most famous lines about the Trinity are from the Holy Sonnet beginning “Batter my heart, three person’d God.” The arresting imagery of that poem, half martial and half marital, is what makes it so memorable. But most of Donne’s references to the Trinity in his poems and sermons are centered on one idea, and a less violent one: That God is a unity rather than a singularity, a communion rather than a monad. And as we gather our scattered selves into the act of worshiping the triune God, we become more unified, more focused, more truly ourselves. In particular, following Augustine’s spirituality, Donne emphasized that our memories, understandings, and wills are knit together into unity as we approach the God who is Father, Son, and Holy Spirit. No doubt a mind so mercurial and many-sided as Donne’s found a much-needed promise of rest in that vision of triune unity.