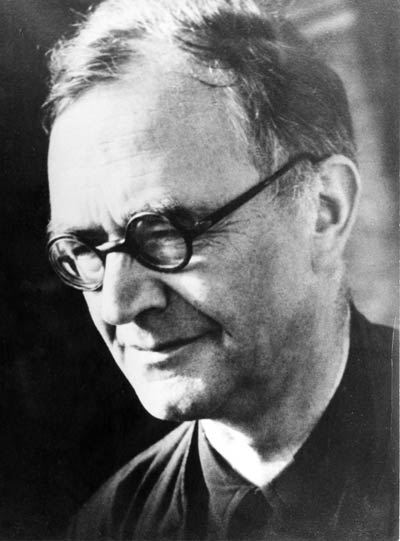 Around 1935, Karl Barth developed a style of speaking and writing that cut through a lot of atmospheric confusion and obfuscation. He found this new tone of voice for two reasons:  first, it was 1935, and the crisis in Germany was becoming impossible for the world to keep ignoring. As a (Swiss) professor teaching in Germany until 1933, Barth had been sounding the alarm for some time. But by 1935 things got seriously Nazi, and the state church of Germany, nominally a Protestant organization, identified itself with the pro-Hitler “German Christian” movement and began taking action against dissident pastors.

But second, Barth found his new tone of voice because he heard the word of God straight from the Bible. Years before, he had set himself on the course of listening to Scripture with real attention, and he had made a lot of noise starting with his epochal Romans commentary. But as he approached age fifty, Barth had spent several years listening and teaching what he heard in Scripture, and it started to sound forth more strongly.

The two factors (content and context, manner and mystery) converged and made this a golden period for Barth’s style. These eventful years are also a bit of a dead spot between publishing of Church Dogmatics volumes: I/1 came out in 1932, and I/2 didn’t appear until 1939. But the stream of short writings and speeches from this time period includes some of my favorite of Barth’s works. When asked where a new reader should start in Barth, I emphasize that the real barthy Barth is in the Church Dogmatics, and readers should get there as soon as possible. But to warm up for those jumbo volumes, I recommend two works from this interim period. First is Credo, a daring little commentary on the Apostles’ Creed (a good sub-title would have been “Dogmatics According to the Apostles’ Creed”). Its dedication page is stark: “1935! To the Ministers Hans Asmussen, Hermann Hesse, Karl Immer, Martin Niemoller, Heinrich Vogel. In memory of all who stood, stand, and will stand.” Credo may be my favorite Barth book.

The second book from this period is God in Action, a lovely short work consisting of three lectures given in Paris in April 1934 and two given in Switzerland later that same year. “The Christian As a Witness” distill’s Barth’s view of church and theology about as well as anything I’ve ever seen (and doesn’t yet draw all the bibliological conclusions that he will draw, unfortunately in my view,  in I/2).

Both books have appendices with transcripts of question-and-answer sessions! The appendix to God in Action is remarkable in every way, as it captures the kind of questions pressed by audience members after Barth has just made the strongest statements.  An Englishman says Barth is right about much of what he says, but ought to give more credit to creatures, to humans as subjects rather than merely objects, to the fact that we are called “not only servants but also friends of God.”

Barth pushes back harder. “If we are to face each other squarely, you must not meet me with such a ‘Yes, but…’; you must answer with a complete and unequivocal No!” After scolding the questioner for praising the speech and then slipping in a little “yes, but,” Barth launches into a direct contradiction of the questioner’s point:

You spoke of Christ. Let me emphasize only one fact. Christ believed He could not bring real and genuine help to man except by dying for him. What does it mean? What shall we infer concerning man? Concerning ourselves? In the face of this fact, in the face of the cross and resurrection of Christ, what shall we assert of man except that man, as man and without Christ, is lost. And to be lost does not mean to have gone astray a little, it means to be wholly lost…. I believe we need to learn anew what the Holy Scriptures say and mean by substitution of Jesus Christ and satisfaction. “I love, yet not I, Christ liveth in me!” In His face, it is impossible even so much as to mention cooperation. Certainly, we are neither stones nor beasts. We are human beings, even very nice people. But Christ was not able to help us in any other way than by dying for us. There is no other help for us than this.

Before taking the next question, Barth informs the un-named Englishman where the question went astray: “I invite you, not to form your estimate of man arbitrarily but to be guided by what the Holy Scriptures say of him. If you will do this for a while, we shall understand each other better…. What is needed above all today is a clear and unequivocal stand: Yes or No! The Church will die if we continue in our mere opinions.”

It was a brave audience that kept asking questions of this thundering orator.  But ask they did: a man from China spoke movingly of the realization of the kingdom of God on earth; a man from India pleas for more attention to the human response to divine Action; a Russian professor tells of the church’s suffering, and urges Barth to admit that “witnessing” involves actions as much as words. The editor of the volume summarizes the next several questions thus: “A series of questions are asked which run in the direction of the objections previously voiced: Barth’s address confines  the concept of witness to too narrow a limit; it needs to be supplemented and integrated in respect to life.”

You can practically hear Barth sigh. “I feel like a man who is making a vain attempt to swim against a torrent. It is quite evident that this conference is against me.” He summons his energy for one final response, a general answer to all the objections, or rather to the “one objection common to you all.” He begins by assuring them that he, too, is a modern man who has seen a little bit of life and has experienced a few things. He tells a little bit of his own biography, of how he pastored for a decade, faced the task of preaching the gospel, and encountered secularism. And what he saw in the church in Switzerland and Germany in those years was not a church that stuck to the message of Scripture (remember that in Barth’s view, “at bottom, the Church is in the world only with a book in its hands”). Instead, he heard on all sides a different message. He saw a church that

Barth gestures around at the history of recent centuries, using categories like pietism and rationalism to explain what happened to the confession of Christian faith in his country. And then he closes with an ominous warning. I quote it at length here because it seems so obviously appropriate to our own day. And the only reason I wrote this blog post was to put this quotation into circulation anyway:

And now let me tell you something from our immediate present day. My dear friends from England and America, I am from Germany. There we have reached the end of the road at whose beginning you are standing. If you begin to take the pious man serious, if you do not care to be one-sided, you will reach the same end before which the official German Church stands today. For what we have experienced in Germany during these latter days –this remarkable apostasy of the Church to nationalism, and I am sure that every one of you is horrified and says in his heart: I thank thee God that I am not a German Christian! I assure you that it will be the end of your road, too. It has its beginning with “Christian life” and ends in paganism. For, if you once admit, “Not only God but I also,” and if your heart is with the latter –and friends, that’s where you have it! –there is no stopping it. Let me assure you that there are many sincere and very lovely people among the German Christians. But it did not save them falling a prey to this error.

Let me warn you now. If you make a start with “God and…” you are opening the doors to every demon. And the charge which I raise against you I lay before you in the words of Anselm: Tu non considerasti, quandi ponderis sit peccatum! You failed to consider the weight of sin! And this is the sin: that man takes himself so very seriously.

You are not yet forced to think on these things. Perhaps it is still  possible in your Churches to carry on discussions about them. The enemy has not yet made his appearance, at least,  not as he has invaded Germany –as the man who has risen to claim his rights, recklessly and brutally. What will you do if a similar fate befall you? Will you face the enemy with the weapons you are now carrying in your hands? Let me assure you in advance that you will never stand before him. In Germany we have learned by experience that the one thing that offered a chance to face the real enemy and refuse his claim was the simple message: God is the only Helper! It was the simple Either-Or which was refused a while ago. Learn in time what may here be learned. You are still soldiers in the barracks. Real firing has not yet begun for you. Some day you may be called to the front line. Perhaps there you will remember our discussion. You may then gain a better understanding of what you do not seem to be able to grasp today. One-sidedness will  be your only chance.