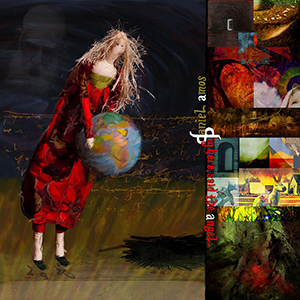 “I sell records worldwide now that I’ve died,” boasts the singer in one of the tracks on the new Daniel Amos album, Dig Here Said the Angel.  The character is a musician, obviously, but postmortem, and somehow (As a ghost? In a dream?) he’s assuring his still-living spouse that everything’s great for him since his death:

I lost my stiff, stiff neck and my hard, hard heart,
My self-respect is off the charts,
Just hanging out here on the other side
Dead to my pride, now that I’ve died!

He doesn’t say much more about his heavenly musical career, aside from mentioning that “the music round here is just my style,” which seems as important as the fact that “the cuisine here is pretty fantastic.” What he really wants to communicate is the unthinkable transformation he’s experienced: “Imagine me all honorable and faithful,” and

I love my neighbor as I love myself,
I’m loved by God and I’ve got my health.
I’m going strong and becoming wise:
I couldn’t lie if I tried, now that I’ve died!

The singer’s so excited about life in this kingdom after death (“the rich serve the poor, and the poor are the rich… it’s kind of hard to describe”) that his line about selling records is a bit of a throwaway; clearly his mind is on bigger and better things. For a 5-minute rock song that doesn’t take itself too seriously, it’s quite a glimpse of the beatific vision.

But in another song on the record, Terry Taylor (the songwriter and vocalist on all but one of the tracks) sighs in a more down-to-earth way, “I found my masterpiece in a discount bin.” I have no doubt he’s singing as himself this time, because I know I’ve found Terry Taylor’s masterpieces in discount bins too often.

What’s the masterpiece that was thus unjustly remaindered? Taylor’s been making records for nearly 40 years now, so there are plenty of them to choose from. Standout moments in the discography include 1986’s Fearful Symmetry, a lyrically dense and musically lavish collection of songs unlike anything I’ve heard elsewhere; or 1987’s remarkable Darn Floor Big Bite, which I can only describe (apologies to T.S. Eliot) as a raid on the inarticulate with post-punk equipment always deconstructing itself in the general clatter of percussion and undulating guitar lines. Or maybe the Daniel Amos masterpiece is 2001’s Mr. Buechner’s Dream, a 2-disc, 34-track argument for the compatibility of faith and imagination (I’ve praised it before, here). Or one of the other albums could be the masterpiece; even among the super-fans there’s little agreement about which one’s best.

Speaking of super-fans, this is a kick-started album that was financed by fans who couldn’t wait any longer for an album by Daniel Amos, and they –okay, we– got our money’s worth. The band is tight, the production is good, and the songwriting has layer upon layer of the musical influences that Taylor and his bandmates (Greg Flesch, Tim Chandler, and Ed McTaggart, with a half-dozen helpers on various tracks) have appropriated.

Two contrasting themes dominate the lyrics: on the one hand is grace, which shows up in a series of short lists, repetitions, and triads throughout the record (“back again to love; holy, holy love,” “mercy mercy mercy on me,” “love, grace, and mercy,” etc). It’s the steady background, and keeps breaking through throughout the record.

But on the other hand is doubt: grace itself is “disguised as adversity,” and the experience of relentless difficulty  makes this mature singer rehearse complaints such as:

Life has been hard, and Taylor pretty straightforwardly declares that he is ready to die: “I pound against the wall of my aging skin, crying ‘Let me out!'” And he laments that he is “sealed in this Lazarus grave with nothing else to do.”  The title track (it’s based on a saying of St. John of the Cross –Daniel Amos fans are spoiled, and get to take this pervasive allusiveness and wide reading for granted by this point) is a deeply ambiguous oracle from an angel who either comforts or threatens: “I’ll tell you straight… don’t plan to go out in style.” The most atmospheric song on the record, “The Ruthless Hum of Dread,” bids fair to portray the sound of approaching death: “groaning for transition,” “rhythm driven by the bass drum thump of meds,” and then

I try to listen again
To your voice drowning in
My blood flowing hot as lead,
As night fears slip in between
Hissing sheets and springs
And in the folds of my sibilant bed.

If you turn it up loud and listen close, it’s nothing less than the aurality of mortality. A little music from heaven comes in at the very end, but it’s only for those who have ears to hear. If you haven’t tuned in sympathetically to the buzzing and humming drone of the patience that can only be exercised by the old, you won’t hear the distant angelic chorale.

And maybe it’s not there. At his rawest, Taylor is willing and able to state his doubts as bluntly as that. In a song that hints at all the highs and lows of a life that veers between the cynical and the miraculous, Taylor throws it down for the skeptic and levels the playing field:

For all the darkness and grittiness of these parts of Dig Here Said the Angel, its overall tone is not bleak. One reason is that Daniel Amos has a lot of musical ideas, and the minor keys can’t contain the jangle and bounce they want to play. But a deeper reason is that Terry Taylor has all the theological resources he needs to hold these doubts and difficulties in context. They really are as bad as he says they are, but he knows there’s something bigger and brighter behind them.

He knows that God’s mercy shows up in our lives as reversals and contradictions: “I saw the last get in first… by moving forward in reverse, and back again to love.” He knows that when “we get dressed in our New Testament best” we are doing the opposite of what comes naturally to us, even after decades of practice at donning that garment again and again. He knows the kind of abandon that it takes to throw yourself on the mercy of God, to say

I’m still the problem
And not some other person, place, or thing.
So to hell with my excuses,
I’ve got no one else to blame.

Because he knows this, he can say directly to the source of “Love, Grace, and Mercy,” that “you’re much too small if you’re not a Mystery,” so “don’t send me certainty if somehow it’s best for me to doubt.” And “if you just say the word, I will get exactly what I don’t deserve.” He knows, in the words of the closing anthem, that “the rain falls on everyone, a common grace for everyone.” And he has the perspective that comes from thinking for forty years about the two little words in the shortest verse in the Bible:

There’s not a holy man
Who doesn’t know grief well,
Or think the road to heaven
Doesn’t pass through hell.
They’ve cried ‘Let me out,’
They’ve heard ‘No, not yet.”
They know before he danced, Jesus wept.

Everybody ought to click right through, right now, and buy Dig Here Said the Angel.  It’s a wise album, with line after line of honest writing. It’s incomparable music that could only be made by a band with this many miles on their odometer and this much fuel still in the tank.