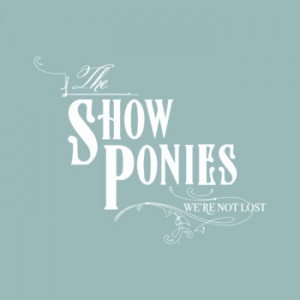 “We’re not lost, we just don’t know where to go.” The lyric from the Show Ponies’ sophomore effort invokes not only the album title, but also one of its major themes: humor and humility in the midst of an uncertain journey.  But rather than “the hero’s journey,” pitting a misunderstood artist against seemingly insurmountable obstacles, each song offers a variation on a duet; a musical reminder that each journey is defined just as much by fellow sojourners as by the destination.

“We’re Not Lost” begins with the barn-burner, “Baby, I’m in Love With You,” reassuring fans that the Ponies can still trot out the foot-stomping bluegrass that typified their first album, “Here We Are!” Back too is the vocal magic of Clay Chaney and Andi Schrock—the two original ponies whose duets evoke the gruff tenderness of Johnny Cash and June Carter. “Here We Are” presented Chaney and Schrock performing with the same contained and personal dynamic as She and Him or The Civil Wars.  Guitarist Jason Harris produced the album before he, fiddler, Phil Glenn, (Johnson House, ’09) and percussionist, Kevin Brown, came onboard to round out the sound.  Two years of touring the West Coast and establishing a grassroots following has resulted in clear growth and sharper chops.  “We’re Not Lost” reaps the fruit of the hard work and manifests a greater range of musical diversity and instrumentation without sacrificing any cohesion.

Every song here belongs, placed carefully within a considered arc. As the album progresses, the upbeat, spunky bluegrass gradually softens to reveal raw and gentle tracks that would have been at home on the soundtrack for “Oh Brother, Where Art Thou?”  Sometimes the songs evoke adventure—at other times a slow, difficult trek—but the lyrics always manage to preserve a sense of hopefulness and forward motion.

The journeys on the album range from  career anxiety to relationships to the longing for spiritual integrity, often within the same song as in “Baby, I’m in Love With You”. This song moves seamlessly between lines like “I’ve been trying hard to keep my faith / And playing in a bluegrass band” to “Most people ask ‘Why would you do this?’/Maybe its because I’m in love.” The song concludes with the lines: “I may go from place to place / but the best one is flat on my face / We once were lost and still need grace/and that’s good enough for me.” The humility of this admission is reminiscent of “Everything I have Was Given to Me”, a gem from their first album that bucks hard against the idea of a “self-made man”, insisting that dependence is not just a necessary part of life, but a good one.

“Whisky and Wine” is a rollicking ode to the “opposites attract” principle, where Schrock and Chaney butt heads with snark and whip-smart zingers:  “Girl you take my breath away /Then go ahead and suffocate /I wanna treat you like a queen / I’d send you to the guillotine.”  The delightful banter culminates as both singers admit, “I hate your guts, but you’ve got soul.”

“Pieces of the Past” offers the other side of the coin, assuming a hushed sobriety in reflecting on the hazards and blessings of relationships.  Where popular broken-heart ballads devolve into sustained blame shifting, Chaney and Schrock offer a more honest and sophisticated look at the idiosyncrasies of human brokenness.  We get lost in love, in family, and friendship, not merely because of personal culpability, but because we are all essentially broken and needy.  The appeal for mercy, “But what was never considered were the cards that I’d been dealt” is balanced against the confession, “When I’ve seen the works my hands have done,/and I found I was the wrong one.”

“We’re Not Lost” goes by quickly—its 11 songs clock in at just under 40 minutes, but it feels expansive and organic.  The upbeat fireworks of harmonicas and handclaps conceal the sustained contemplation of serious matters.  By the time you’re hooked you’ve been drawn along to songs like “Brother Do You Love Her.” Here, Glenn channels Mark O’Connor with a haunting Appalachian lilt while Chaney and Schrock reflect on seemingly easier times: “Remember all the things we said we’d do / Think back to when our hearts were young / And unafraid to prove ourselves untrue.”

While the songs hint at the promise of forgiveness and reconciled community, the album concludes with yearning for a wholeness and restoration that community alone cannot achieve.   “I Regress” is, perhaps, the album’s crowning achievement, fusing Psalmic pleas to the majestic simplicity of a spiritual.

Grant me Lord what I can’t afford
To be made right, to be restored
Take not thy spirit from my chest
Or I regress, or I regress

The last refrains build with an anthemic intensity—the drums boom with reverb as Chaney and Schrock proclaim on our behalf the need for rescue. There’s something profoundly right in such a conclusion to the album.  Instead of contemplating our personal failure and frailty, the temptation is to evade and avoid; to hope that God won’t dwell on our sins if we don’t.  The Show Ponies reject this self-isolation and invite us to regard each shortcoming and vulnerability as an invitation to mercy.  And they do so with an ardency that conjures David, unashamed, dancing before the Ark of the Covenant.

The Show Ponies will release “We’re Not Lost” at 7:00pm this Saturday, October 12, at The Mint in Los Angeles.