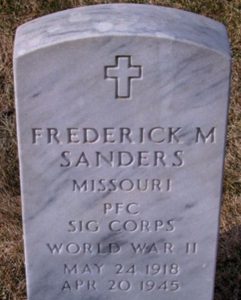 On Memorial Day, I just spent a few minutes scratching together some information on my paternal grandfather, who was the first Fred Sanders in my family line. There are four of us in the series, but all with different middle names.

I have a few photos of him in an album somewhere, but of course never met him: even my own dad barely met him, their lifespans overlapping by only about 5 years total.

Frederick Manning Sanders enlisted in the Army at age 24 (“At the time of enlistment, Frederick M. Sanders was married, stood 67 inches tall, weighed 133 pounds, and had an education level of grammar school”). He was in the Signal Corps, and while I haven’t found much detail about his service, Signal Corps had major operations in Algiers and then in Caserta, Italy,  operating out of the 1200-room Royal Palace there. Sanders served in Europe from late 1942 until the end of the war. 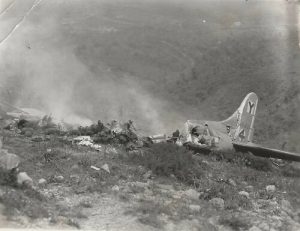 Or almost the end of the war: He was on a Flying Fortress (a Boeing B-17G named “Mary Rose”) that crashed near Caserta on April 20, 1945. About 21 people died in the crash. It looks like he was the lowest-ranking serviceman on the flight. This was the point in the war that was characterized by mass surrenders from axis troops in the European theater: V-E day was just a couple of weeks later, May 8.

Many of the victims of the crash were buried in an American cemetery in Italy, but Sanders received burial in Jefferson Barracks National Cemetery in St. Louis.