Joos van Wassenhove (a.k.a. Justus of Ghent) was a Renaissance Netherlandish painter who spent the greater part of his career in Italy. He became a member of the Antwerp Guild in 1460, but by 1464 had moved to Ghent. Sometime after 1468 he went to Rome and by 1472 had settled in Urbino. Joos’s only documented work is The Communion of the Apostles (also known as The Institution of the Eucharist, 1472-74), painted originally for the high altar of the Brotherhood of Corpus Domini in Urbino, the work is still at Urbino, in the Gallery of the Marches at the Ducal Palace. (There are a series of paintings attributed to van Wassenhove by some scholars but this remains unsettled.) I ran across this painting recently and have been looking at it and reflecting on it all week. As an Anglican who attends a church dedicated to the Blessed Sacrament, I guess it is not that odd to be interested in paintings dealing with the Eucharist such as this one and Raphael’s Disputation over the Sacrament (also simply known as the Disputa). Joos van Wassenhove’s painting, however, catches the imagination because it portrays the very moment of Christ instituting the Eucharist. 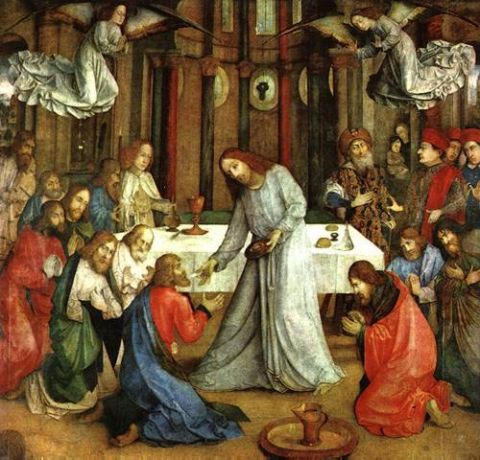 As one can see in the painting itself there are more than twelve figures so immediately one should ask, who are all these other people? Based on their dress there are both apostles and Renaissance-era persons in the picture. Jesus dominates the central portion of the painting with nine persons on both his left and right, creating an ideal balance in the painting and forcing the eye towards Jesus. Nine of the apostles are to the left of Jesus (as one views the painting) and three are on the right. It is clear that Judas is in the furthest back left portion of the painting, clutching his thirty pieces of silver. The beloved disciple John is standing at the altar with his hand on the cruet, perhaps serving as the deacon. Most of the other disciples are kneeling, waiting for Jesus to administer the host by placing it directly on their tongues as opposed to placing it in their hands. In his hand Jesus holds the paten. The chalice remains on the altar, waiting to be administered. Directly in front of the chalice, lying on the corporal, are additional consecrated hosts, giving the impression that there are others to be communicated. To the right of Jesus (again when viewing the painting) are van Wassenhove’s patron Federico da Montefeltro, Duke of Urbino, along with two of his courtiers, and, according to scholars Caterino Zeno, the ambassador of the Shah of Persia. Between the shah and Federico is a young woman holding the duke’s son, Guidobaldo, the next Duke of Urbino. Finally, hovering above the whole scene are two angels.

What is so striking about this picture, in my opinion, is the reverence for the Eucharist capture primarily in the faces and actions of the apostles. Van Wassenhove has most of the apostles pictured with folded hands, waiting reverently for Christ to bring them the host. The apostle to the immediate right of Jesus (when viewing the painting) is bowed slightly in reverence. To his right an apostle’s hands are folded across his chest, a posture indicating that he did not wish to receive the Eucharist for some reason. The non-apostolic persons pictured, however, seem to be less interested in what is happening, creating the appropriate “distance” in the painting between the event itself and the subsequent 1450 year interval to the time of the composition of the painting. The scene is pregnant with a sense of the sacred; that what is happening is of great significance. That the painting hung above an altar of a brotherhood dedicated to the body of Christ is highlighted, in particular, by the fact that Jesus is administering the host as opposed to the chalice — the body instead of the blood.

This painting is a vivid reminder of the significance of Jesus’ last meal with his disciples. Regardless of one’s theology of the Eucharist/Communion, that Jesus broke bread and drank wine with his disciples and commanded that all of his followers are to do the same in “remembrance of Him,” should spur us one to a reverent understanding and participation in the Eucharist/Communion whether that is weekly, monthly or otherwise. Like the apostles in van Wassenhove’s painting, may we reverently approach the bread and the wine, cognizant that we too are participating in the ongoing work of Jesus Christ on earth. That Christ is present with us in the very moment for he will never leave us or forsake us.