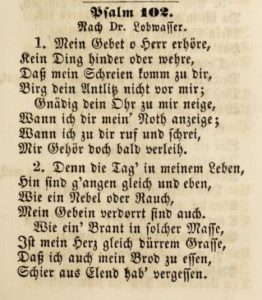 The first line of Psalm 102 asks God the same thing twice: “Hear my prayer, O Lord, and let my cry come unto thee.”

Or does it? Martin Luther, commenting on the psalm, takes the two requests as really distinct from each other: on the one hand there’s a prayer, and on the other hand there’s a cry. On this reading, the Psalmist asks God to hear his prayer, and also to let his cry ascend.

What’s the difference between a prayer and a cry? Luther explains it in term of intellect and feeling: “The intellect makes the prayer, but the feeling makes the cry.” The feeling is the impulse of desire: vague, unstructured, nonthematic. But the prayer is formed, directed, and instructed: it shows the feeling “what it should desire, and how and whence.”

to pray with the mind, that is, with meaning, is to have the meaning of the words which one reads or speaks. And according to this form the cry and desire is shaped, according to which prudence and thought forms every act of the will.

Luther doesn’t distinguish the two in order to keep them separated from each other. On the contrary, he distinguishes in order to unite them: Our requests to God should arise from deep feeling and proceed to deep understanding. The Psalmist models this, because “he has the mind and the spirit in his prayer at the same time, for he understands what he prays, and he knows what he desires.”

Luther doesn’t intend this as a global teaching on prayer, as if we should only use the word “pray” when we are intending to make this distinction between prayer and cry. It’s pretty obvious the rest of the Bible doesn’t observe such rules (as Luther tacitly acknowledges when he quotes 1 Cor 14). It’s a local observation he makes about what is going on in this verse. But dividing the intellectually formed prayer (which God is asked to “hear,” that is, to acknowledge, understand, and accept) from the unformed and uninstructed cry (which can rise up to God, by his grace) is a fruitful way of bringing forth a depth of meaning in the psalm.

Cry out and pray; pray and cry out. God will hear, and it will ascend to him.

Scriptorium bonus: Check out Augustine on the same Psalm (with pictures!).