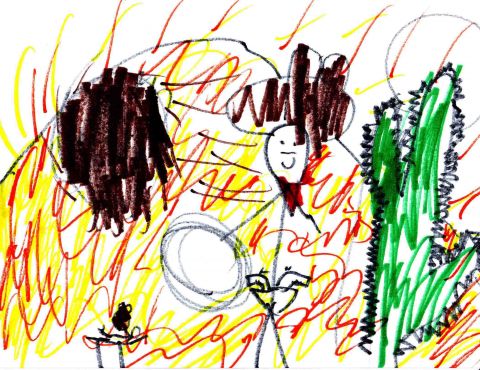 Psalm 83 depicts a dreadful scene: the enemies of God’s people devising schemes to wipe them out of existence. Against this background, the Psalmist prays for deliverance, asking God to do to these enemies the kind of things he did through champions in the book of Judges.

One line is especially striking. I grew up with the King James Bible, which renders verse 13 as: “O my God, make them like a wheel; as the stubble before the wind.” Like a wheel? Is that bad? The ESV renders “wheel” as “whirling dust,” which gives us this verse: “O my God, make them like whirling dust, like chaff before the wind.” But the ESV translators also throw a footnote at the reader: “Or like a tumbleweed.”

Now there’s a Psalm you can get into if, like Freddy Age Seven, you’re into cowboys. In this illustration, the hot red and yellow of the desert background make a thirsty scene. The smiling cowboy (two guns, holsters, big hat, rope coil, mustache) stands between a cactus and a tumbleweed. Yes, that brown blob is a tumbleweed.

“Tumbleweed” is a bit of a guess, but it sure beats “wheel.” Biola Old Testament prof Joe Henderson tells me the Hebrew word used here is related to the word galal, which is the root for all kinds of Hebrew words which mean things like stone-heap, rolling-waves, dung-pellets, idols that remind you of dung-pellets, a curtain-rod, a travel circuit, a scroll, a chariot wheel, a whirlwind, a skull.