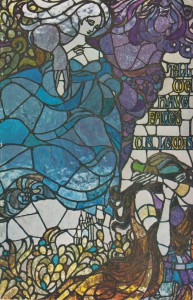 g, Fred Sanders and I participated in a chapel honoring C.S. Lewis’ life and works. Here’s a little reflection on a passage from Till We Have Faces:

Be careful of the story you tell yourself. This is some of the best advice my husband has ever given me. And, as we listen to the words of Orual in the climax of Till We Have Faces, she is coming to terms for the first time with the story she has been telling herself for her whole life.

Orual had always believed two things with perfect certainty: that she loved her sister Psyche, and that the gods had tricked her into betraying Psyche and ruining both of their lives. Here, Orual is finally given permission to bring her accusation against the gods. But when she tries to speak, a strange thing happens. Orual doesn’t end up giving all the arguments she had been rehearsing. She doesn’t justify her own actions, and she doesn’t prove that the gods were to blame.

I looked at the roll in my hand and saw at once that it was not the book I had written. It couldn’t be; it was far too small. And too old – a little, shabby, crumpled thing, nothing like my great book that I had worked on all day, day after day. I thought I would fling it down and trample on it. Yet I found myself unrolling it. It was written all over inside, but the hand was not like mine. It was all a vile scribble – each stroke mean and yet savage, like the snarl in my father’s voice. A great terror and loathing came over me. I said to myself, “Whatever they do to me, I will never read out this stuff. Give me back my Book.”

But already I heard myself reading it. And what I read out was like this: “I know what you’ll say. You will say that I was shown a real god and ought to know it. Hypocrites! I do know it. As if that would heal my wounds. You know well that I never really began to hate you until Psyche began talking of her palace and her lover and her husband. Why did you lie to me? You said a brute would devour her. Well, why didn’t it? I’d have wept for her and buried what was left and built her a tomb and . . . and. . .. But to steal her love from me! It would be far better for us if you were foul and ravening. We’d rather you drank their blood than stole their hearts. We’d rather they were ours and dead than yours and made immortal.

If you’d gone the other way to work – if it was my eyes you had opened – you’d soon have seen how I would have shown her and told her and taught her and led her up to my level. But to hear a chit of a girl who had (or ought to have had) no thought in her head that I’d not put there, setting up for a seer and a prophetess and next thing to a goddess . . . how could anyone endure it?

Oh, you’ll say you took her away into bliss and joy such as I could never have given her, and I ought to have been glad of it for her sake. Why? What should I care for some horrible, new happiness which I hadn’t given her and which separated her from me? Do you think I wanted her to be happy, that way? It would have been better if I’d seen the Brute tear her in pieces before my eyes. You stole her to make her happy, did you? I’ll thank you to let me feed my own; it needed no titbits from your table. Did you ever remember whose the girl was? She was mine. Mine. Do you not know what the word means? Mine! You’re thieves, seducers. That’s my wrong.”

There was utter silence all round me. And now for the first time I knew what I had been doing. While I was reading, it had, once and again, seemed strange to me that the reading took so long; for the book was a small one. Now I knew that I had been reading it over and over – perhaps a dozen times. I would have read it forever, quick as I could, starting the first word again almost before the last was out of my mouth, if the judge had not stopped me. And the voice I read it in was strange to my ears. There was given to me a certainty that this, at last, was my real voice.

At last the judge spoke.

The complaint was the answer. To have heard myself making it was to be answered. Lightly men talk of saying what they mean. When the time comes to you at which you will be forced at last to utter the speech which has lain at the center of your soul for years, which you have, all that time, idiot-like, been saying over and over, you’ll not talk about joy of words. I saw well why the gods do not speak to us openly, nor let us answer. Till that word can be dug out of us, why should they hear the babble that we think we mean? How can they meet us face to face till we have faces?

Instead, Orual gets confronted with herself. She says out loud for the first time the real thing that she had been saying in her heart all her life. And it turns out that while she has lots of justifications for her actions, Orual hasn’t known until this moment what her true motivations were. Orual finds out that she didn’t love her sister the way she thought she did. In fact, Orual was so angry that Psyche had been chosen by the gods, had been taken out of her control, that she would have preferred the gods had killed Psyche instead. Orual learns at this moment that she acted the way she did because wanted Psyche all to herself forever. She chose to destroy Psyche’s happiness, rather than allow Psyche to be happy without needing her.

Lewis is getting at so much in this myth, but I think one of the most important things he is doing is reminding me that really knowing what’s going on in my heart is way harder than I think it is. Even when I take the time to look inside myself (which is hard enough in a world as shiny and full of distractions as this one), I still have to examine what I find there carefully. Sometimes when I ask myself why I did something, my heart will try to tell me I had good reasons for doing what I did, that I was totally justified. My heart covers up the real reasons why I act, especially when those reasons are sinful.

You’re probably all familiar with Jeremiah 17:9 which says, “The heart is deceitful above all things, and desperately sick, who can understand it?” Most of the time when I hear that verse, I think it’s talking about other people’s hearts. I don’t remember that my heart is deceitful, and that sometimes the person it’s deceiving is me.

Sometimes after a fight with my husband, I lie in bed and rehearse all of the reasons why I’m in the right and he’s in the wrong. I revise my complaint again and again until I’ve phrased it perfectly, and then I imagine saying it to him, and watching him fill with remorse and beg for my forgiveness. But when I really consider my story honestly, I realize that I’m telling myself a lie. I’m telling the story so that I come out on top. I’m making myself the heroic victim, the one who did everything right, who suffered unjustly, but I know this isn’t true. This loud complaint is only masking my own fault; all of the ways I could have done better, but didn’t.

We all have motives we’re ashamed of. And we’re all pretty good at covering up those shameful motives, even to ourselves. But in this passage, Lewis is challenging us to uncover the true content of our hearts and take a good look at it.

In the end, Orual gets a gift from the gods. She gets to hear her story, not as she would like it to be, but as it truly is. She gets to meet herself face to face, and when she does that, she gets to meet God too. This is something I am still learning to do, and I need grace to do it. I want to know whether the story I’m telling myself is true. Am I making myself out to be the hero by editing out all of my selfish motivations? Am I making myself a victim to cover up the fact that I’m really feeling guilty for hurting someone else? When I know the answers to those questions I will be able to hear my own, true, voice. And only when I know what I’m actually saying will God be able to answer me.