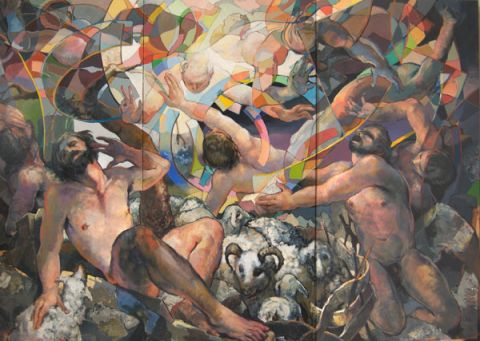 The folks over at Theology Forum are hosting a blog exhibition this week on the work of Edward Knippers, an important American painter. On Monday they posted several pictures along with a statement by the artist. Not all artists are able to write about their own work in a helpful way –some of them should shut up and paint!– but Edward Knippers is a thoughtful, well-read, and eloquent critic, so his explanation of what he’s up to is well worth reading.

For the rest of the week, they’ll post theological responses to Knippers’ work. On Tuesday, the second day of the exhibition, I’m the featured respondent. When I first agreed to write this short piece on Knippers for Theology Forum, I didn’t realize just how important his painting career has been for me over the years. As soon as I started flipping through some old catalogs of his work, though, I realized that he’s been productive all my life, patiently working away at painting his distinctive vision of the truth of the gospel as expressed in the human body. His presence meant a great deal to me as an evangelical art major at a state university in the 1980s, and it continues to mean a lot to me as a theologian who doesn’t make much art anymore.

Here’s something I say in the essay:

Up close, a Knippers painting is a revelation: in your space, in your face, confrontational and aggressive. His pinkish giants donâ€™t stay in a polite middle distance in his images, but crowd the foreground. A room with three or four of them in it feels more like a wrestling arena than an art gallery. None of this is accidental, because Knippers is an artist who knows what he is about and is unusually articulate about his work. His work poses questions, and he has answers that send you back to the work with greater motivation to look harder.

Click on over there and see the pictures. In the following two days, a couple more theologians will post their essays on the paintings of Edward Knippers, so check in again. That’s a whole lot of theologizing about paint, but the best thing is the work itself, in which Knippers theologizes in paint.