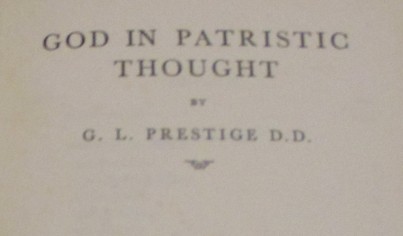 The age of the full-scale “hellenization” critique of early Christian doctrine seems to have passed, at least for now: anybody who wants to assert that the church’s early thinkers allowed the pure biblical message to be contaminated by Greek thought has to write so many footnotes qualifying the charge, answering compelling objections, making reasonable concessions, and adding nuance, that it’s hardly worth doing (See for example Chr. Markschies’ 2012 article “Does it Make Sense to Speak about a ‘Hellenization’ of Christianity in Antiquity?”).

To do its intended job, the hellenization critique needs utterly stark contrast, a strife between the real God of the Bible and the false gods of human speculation. So when the critique dies the death of a thousand qualifications, it really dies dead.

But it seems to me that the charge is still alive and well at the popular level: writers who don’t use the ungainly word “hellenization” (never mind reciting its Hatch-and-Harnack pedigree) will nevertheless charge the early church’s writers with being under the influence of Plato or a generalized platonism. And even at the popular level, it’s not the same charge as it used to be: high liberalism’s suspects were doctrines like Trinity and two-natures christology, whereas now sensitive noses pick up the whiff of musty paganism in doctrines like divine impassibility, eternity, and (at a more academic level) substance metaphysics, and (often supporting better philosophical arguments) divine simplicity.

By the time the charge becomes broad and general, it alleges that platonic ways of thinking were in the air, and that the church fathers couldn’t help picking them up and speaking in their idiom. Fair enough. And here are some more concessions I’d gladly make to the concerns articulated by the literature of dehellenization: vigilance against syncretism is commendable, scripture alone is the final arbiter, the god of the philosophers is not necessarily the God of Abraham who is living and eternally relational. Scrutinizing the intellectual categories of classic Christian doctrine is well worth doing. We should be equally critical of our own intellectual environment, which is harder to do.

G.L. Prestige, way back in the 1930s, made this observation about platonism in the ancient world:

It permeated the very atmosphere mentally absorbed by Christians of the second and third centuries, even more completely than simplified biology and third-hand physics pervade the popular intellectual atmosphere of the twentieth century.

When I’m finished applauding that, I might only add a few economic or political assumptions to “the popular intellectual atmosphere” of our age. Prestige goes on to say that the “the ancient environment was the more admirable” than ours in one specific way:

it possessed, what the intellectual atmosphere of the modern populace does not possess, a really critical and philosophical basis. If people thought at all they could only think in that medium. (God in Patristic Thought, 1936)

And the same goes for us, with our “simplified biology and third-hand physics.” Our brains, as we say these days, just work that way.

Around the same time as Prestige was writing, Karl Barth was just gathering momentum for the task of producing the Church Dogmatics for the next three decades. In the preface to I:1, he predicted that critics were not going to be pleased with his decision to turn his full attention on classic Christian doctrines and to handle them in running dialogue with the church fathers and the medievals:

It would seem that Church history no longer begins for me in 1517. I can quote Anselm and Thomas with no sign of horror. I obviously regard the doctrine of the early Church as in some sense normative. I deal explicitly with the doctrine of the Trinity, and even with that of the Virgin Birth.

Horrors! The gaping maw of scholasticism opens wide for the author who a few years earlier showed such promise as a feisty contrarian. With good humor, Barth shrugged off the criticism. The way forward for him required an appropriation of the traditional modes of thought, and he had long since learned to be suspicious of what his theological teachers had hidden from him:

not merely the most important but also the most relevant and beautiful problems in dogmatics begin at the very point where the fable of ‘unprofitable scholasticism’ and the slogan about the ‘Greek thinking of the fathers’ persuade us that we ought to stop.

“Important… relevant and beautiful.” Of course Barth was on his way to a certain type of revision of Christian theology as much as he was launching a campaign of retrieval; he was “orthodox and modern.” But to get the program started at all, he had to climb over a barricade marked “Greek Thinking of the Fathers.” It’s a good barricade for climbing over.